Tottenham take on Cardiff City at Wembley on Saturday afternoon. Here is the side we think Mauricio Pochettino will select for the game:

Tottenham will be looking to bounce back from their defeat to Barcelona when they take on Cardiff City at Wembley on Saturday afternoon. Here is the side we think Mauricio Pochettino will select for the game:

Goalkeeper: Hugo Lloris returned to the starting eleven on Wednesday night after recovering from a thigh injury and the Frenchman looked a little rusty during the 4-2 defeat to Barcelona having been at fault for the opening goal. However, he’ll still keep his place on Saturday with Paulo Gazzaniga continuing as back up as Michel Vorm remains out with a knee problem.

Defence: Jan Vertonghen has been ruled out due to a hamstring injury that he sustained against Huddersfield last weekend while Serge Aurier is also expected to miss out due to a thigh problem.

Pochettino could stick with a back four with Davinson Sanchez alongside Toby Alderweireld in the middle of defence and Kieran Trippier should retain his place at right-back. However, Danny Rose could be recalled in place of Ben Davies at left back.

Midfield: Mousa Dembele is expected to miss out once again as the Belgian international is suffering from a thigh problem so Harry Winks could retain his place but I think we might see Eric Dier recalled in the middle of the park with Victor Wanyama making way.

Spurs are likely to be without the influential Christian Eriksen as the Danish international is still struggling with an abdomen injury while Dele Alli will also miss out due to out an ongoing hamstring injury that he aggravated last week.

Therefore, Pochettino may decide to add some fresh legs to midfield with Moussa Sissoko pushing for a recall after regaining full fitness in recent days.

Attack: Erik Lamela had a solid game against Barcelona and got himself on the score-sheet at Wembley so the South American could keep his place in attack against Cardiff.

Hueng-min Son may also keep his place so Lucas Moura may be the man to make way if Pochettino decides to add another midfielder to his ranks on Saturday.

Harry Kane scored his third goal in two games with a strike against Barcelona last night and the England international is almost certain to lead the line up front against Cardiff this weekend. 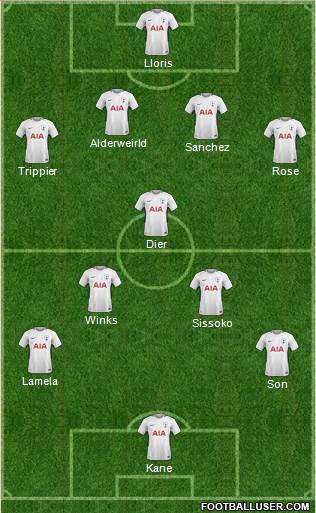