Arsenal take on Blackpool in the League Cup at the Emirates on Wednesday. Here is the side Gooner Mac thinks Unai Emery will select for the game:

Arsenal will be looking to book their place in the quarter finals of the Carabao Cup when they take on Blackpool at the Emirates on Wednesday. Here is the side Gooner Mac thinks Unai Emery will select for the game:

Goalkeeper: Petr Cech was back on the bench against Crystal Palace at the weekend after recovering from a hamstring injury. Bernd Leno kept his place between the sticks so it looks like he’s now Emery’s No.1 meaning Cech is likely be play in the League Cup tomorrow night.

Defence: Our options in the middle of defence are limited as Dinos Mavropanos remains injured while Laurent Koscielny isn’t available yet as he’s still working his way back to full fitness from an Achilles injury.

Sokratis was surprisingly named on the bench against Palace and it will be interesting to see if he starts against Blackpool as you’d assume he’ll be in the bosses plans for Liverpool on Saturday. The Greek international has only recently returned from injury so Emery may use tomorrow’s game to get him back up to speed.

Shkodran Mustafi returned to the side on Sunday after not featuring in the Europa League game against Sporting Lisbon last week so he could keep his place meaning Rob Holding is the man most likely to make way.

Sead Kolasinac and Nacho Monreal will face late fitness tests after missing the last three games with hamstring injuries. Kolasinac trained today so he could feature but I don’t think Emery will risk them with Liverpool in mind.

Hector Bellerin has been ruled out of the game after being forced off at half-time against Palace with a thigh injury and he’s facing a race against time to be fit for the Liverpool game. Stephan Lichtsteiner is almost certain to start and he could be deployed at left-back with Carl Jenkinson coming in to make his first appearance in almost two years.

Midfield: Mohamed Elneny has been ruled out for two weeks with a thigh injury so Ainsley Maitland-Niles could get a chance in midfield after recovering from a fractured leg that he suffered on the opening weekend of the season.

Lucas Torreira and Granit Xhaka should be rested but Matteo Guendouzi could keep his place in the middle of the park. Aaron Ramsey has lost his first team place in recent games so the Welshman is expected to come back in to the starting eleven against Blackpool.

Attack: We should see plenty of changes in attack with Alex Iwobi, Pierre-Emerick Aubameyang and Alexandre Lacazette all given a rest ahead of Saturday’s Premier League clash with Liverpool.

Danny Welbeck is set for a recall up front and he’ll be looking to build on his winning goal against Sporting Lisbon in the Europa League last week while Henrikh Mkhitaryan should also come back in to the starting eleven after being named on the bench at the weekend.

Emile Smith Rowe has featured in the cups this season and I expect the 18-year-old to be given another chance to impress against Blackpool tomorrow night with Eddie Nketiah also named on the bench along with Joe Willock. 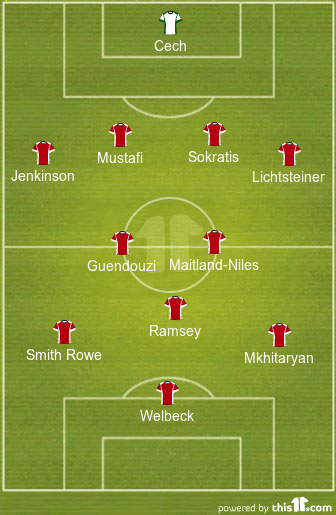