Tottenham take on Wolves at Molineux on Saturday night. Here is the side we think Mauricio Pochettino will select for the game:

Tottenham will be looking to keep the pressure on the top four with a win when they take on Wolves at Molineux on Saturday night. Here is the side we think Mauricio Pochettino will select for the game:

Goalkeeper: Number One Hugo Lloris is set for a recall after being rested for the midweek Carabao Cup win over West Ham so Paulo Gazzaniga will drop back to the bench this weekend.

Defence: Pochettino is expected to make some changes to his defence with Kieran Trippier in-line for a recall at right-back with Serge Aurier making way while Ben Davies will return at left-back. Kyle Walker-Peters got a run-out in midweek in the absence of Danny Rose but the youngster will drop out of the squad against Wolves.

Jan Vertonghen remains on the sidelines as he’s still recovering from a hamstring injury that’s expected to keep him out for another month but Toby Alderweireld is expected to be recalled on Saturday after being rested at the London Stadium. Juan Foyth put-in an impressive display against the Hammers but he’s still set to drop out with Davinson Sanchez keeping his place in the middle of defence.

Midfield: We should see changes in midfield with Mousa Dembele and Eric Dier set for recalls after being rested in the League Cup. That means Victor Wanyama and Harry Winks will make way but Christian Eriksen could keep his place after returning for the win over West Ham on Wednesday night.

Attack: Dele Alli returned to the starting eleven against West Ham after recovering from a hamstring injury and set-up two of the goals but Pochettino may be reluctant to start him again so soon after only just returning from a lengthy absence.

Erik Lamela is pushing for a recall but Hueng-min Son will be hoping he did enough to keep his place after scoring twice against the Hammers while Lucas Moura should come back in to the attack on the right.

Fernando Llorente scored a decent goal during his rare start last night but the Spaniard is certain to drop back to the bench on Saturday with Harry Kane being recalled up front having been given a well-earned breather in the League Cup. 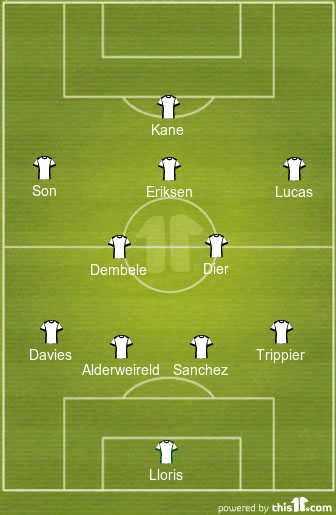