Here is our match preview ahead of Arsenal’s Europa League clash with Sporting Lisbon at the Emirates including team news, line-ups and prediction

Arsenal will be looking to secure qualification to the knockout stages of the Europa League when we take on Sporting Lisbon at the Emirates this evening.

The squad overcame a huge test at the weekend after coming from behind to earn a much-deserved point against Liverpool with Alexandre Lacazette scoring a fine equaliser to make it 1-1 and extend our unbeaten run to 14 games in all competitions.

We head in to tonight’s game sitting three points clear at the top of Group E after Danny Welbeck earned a 1-0 victory in Portugal two weeks ago. We can secure qualification to the knockout phase by bettering Vorskla’s result against Qarabag while a win would all-but wrap-up top spot.

Arsenal should be confident of getting all three points tonight but Sporting have won both their Primeira Liga games since losing to us a fortnight ago so they’ll be hoping to head back to Portugal with a positive result this evening.

Nacho Monreal returned to light training this week but he won’t be risked after carrying a niggling hamstring injury for the past month while Mohamed Elneny is also still missing due to a thigh problem.

Laurent Koscielny has continued to build on his fitness in training as he bids to return from Achilles surgery but Unai Emery has confirmed the defender won’t be considered for selection until after the international break.

The boss is expected to rotate his squad with the likes of Petr Cech, Stephan Lichtsteiner, Ainsley Maitland-Niles, Matteo Guendouzi, Alex Iwobi, Aaron Ramsey and Danny Welbeck all pushing for recalls.

Sokratis is available again after recovering from an ankle injury while youngsters Emile Smith Rowe and Eddie Nketiah will hope to feature.

As for Sporting, they have injury problems to deal with as Rodrigo Battaglia is a doubt after picking up a knock at the weekend while Stefan Ristovski, Stefano Sturaro and Raphinha are also set to miss out. 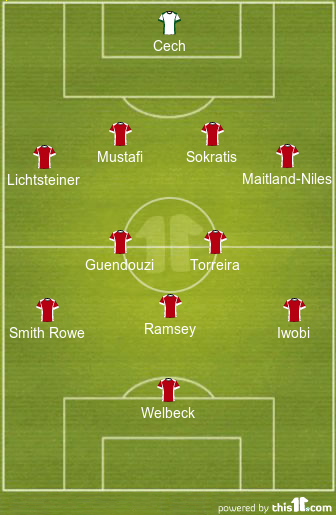 Arsenal 2-0 Sporting Lisbon: We haven’t conceded a single goal in our last three meetings with Sporting and they’ve won just four of their last 27 away games in Europe so I’m confident we’ll get a result tonight. We’re on an excellent run and Sporting didn’t cause us too many problems in the reverse fixture, so I’m backing the boys to win 2-0 this evening.