Arsenal take on Tottenham at the Emirates on Wednesday night. Here is the side Gooner Mac thinks Unai Emery will select for the game:

Arsenal will be looking to book their place in the semi-finals of the Carabao Cup when they take on Tottenham at the Emirates on Wednesday night. Here is the side Gooner Mac thinks Unai Emery will select for the game:

Goalkeeper: The boss is expected to rotate his goalkeepers so Petr Cech should come in to replace Bernd Leno. The German could probably do with a night off after making a couple of mistakes in recent games.

Defence: Emery is likely to stick with a back three but I don’t think Laurent Koscielny will start a third game in six days. The Frenchman was out of sorts against Southampton and is going to take time to get back to his best after seven months out so I think he’ll be rested tomorrow night.

Shkodran Mustafi is a doubt with a hamstring injury and I don’t think he’ll be risked in the League Cup so we have limited options at centre-back with Rob Holding and Dinos Mavropanos out. Sokratis is back from a ban so he should be recalled and he might be joined by Nacho Monreal and Stephan Lichtsteiner in the back three.

Midfield: Sead Kolasinac and Hector Bellerin weren’t in training today and are major doubts with thigh and calf injuries respectively so I don’t think we’ll see them feature against Tottenham on Wednesday night. That leaves us short in the wing-back positions so Carl Jenkinson could get another start on the right with Ainsley Maitland-Niles coming in on the left.

Lucas Torreira has worked tirelessly in recent games so he deserves a break. Mohamed Elneny is an option if Emery wants to also rest Granit Xhaka but I think the Swiss international will keep his place and move in to midfield following his stint in defence. Matteo Guendouzi is likely to keep his place in the middle of the park.

Attack: Alexandre Lacazette was named on the bench against Southampton at the weekend so I expect him to be recalled with Pierre-Emerick Aubameyang given a breather against Spurs.

Mesut Ozil has made two substitute appearances since recovering from a back injury so the German playmaker may find himself recalled in attack tomorrow night and Emery will be looking for a big performance from him.

Aaron Ramsey is also in contention after recovering from an ankle injury so he could be deployed in an advanced role alongside Ozil with Alex Iwobi and Henrikh Mkhitaryan making way. Youngsters Buyaka Saka and Eddie Nketiah could be named on the bench but Emile Smith Rowe misses out with a hip injury. 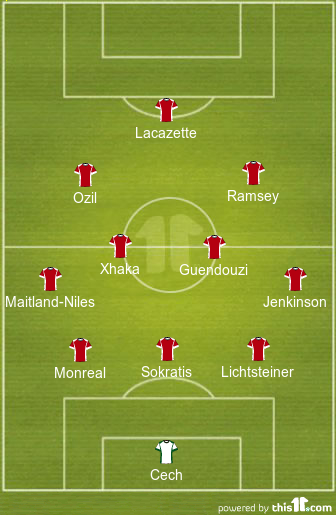