Arsenal welcome Burnley to the Emirates on Saturday lunchtime. Here is the side Gooner Mac thinks Unai Emery will select for the game:

Arsenal will be looking to get back to winning ways after two disappointing results when they welcome Burnley to the Emirates on Saturday lunchtime. Here is the side Gooner Mac thinks Unai Emery will select for the game:

Goalkeeper: Petr Cech started against Tottenham in the Carabao Cup defeat on Wednesday night but I think Bernd Leno will be recalled this weekend despite making a couple of mistakes in recent games.

Defence: Arsenal’s problems at the back could be eased as Shkodran Mustafi is expected to return having recovered from a hamstring injury so the German international is likely to start in defence. Sokratis will keep his place after returning to action against Spurs while Nacho Monreal could be deployed on the left side of the back three as that would give us good balance. Laurent Koscielny is clearly still rusty having been out for seven months so Emery may decide to leave him on the bench.

Arsenal star Hector Bellerin is out with a calf injury so Stephan Lichtsteiner could come in for Ainsley Maitland-Niles in the right wing-back role. Sead Kolasinac will be handed a late fitness test after missing the last couple of games with a thigh injury. If he’s passed fit then I expect him to start in the left wing-back role. If Kolasinac is ruled out, then Monreal will move wide with Koscielny coming in to the back three.

Midfield: I was surprised Lucas Torreira started against Tottenham as he’s looking a little tired but we can’t afford the luxury of resting him in a Premier League game so he’ll continue in midfield. The Granit Xhaka at centre-back experiment hasn’t worked so hopefully Emery moves him back in to midfield this weekend. Matteo Guendouzi is likely to drop out after playing a lot of football lately.

Attack: I was also shocked that Alexandre Lacazette was left on the bench against Tottenham last night but I expect the Arsenal striker to be recalled against Burnley having been a threat whenever he’s come on lately.

Pierre-Emerick Aubameyang should keep his place so we could see Emery go with the Gabon international alongside Lacazette – although Auba could also move out to the wing if needed.

Mesut Ozil’s fall-out with Emery took another turn for the worse as he was axed from the entire squad last night. The Arsenal boss publicly cited ‘tactical reasons’ as the excuse for his absence so things have clearly gone downhill between the two men. Given the opposition on Saturday [no disrespect to Burnley], we could see Ozil back in the squad but I think a place on the bench is the best he can hope for.

Aaron Ramsey played well against Spurs so he should be in contention to start. Alex Iwobi and Henrikh Mkhitaryan have struggled lately so I wouldn’t be surprised to see Ramsey get the nod – especially if Emery goes with two up front. 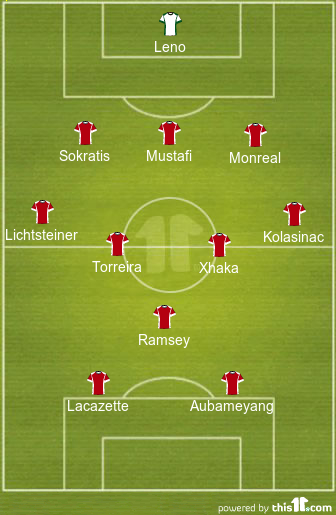