Tottenham will look to tighten their grip on third place with a win when they take on Everton at Goodison Park on Sunday afternoon. Here is the side we think Mauricio Pochettino will select for the game:

Goalkeeper: Paulo Gazzaniga once again impressed during Tottenham’s 2-0 Carabao Cup win over Arsenal in midweek as he pulled off a couple of vital saves but I still think Pochettino will recall number one goalkeeper Hugo Lloris on Sunday.

Defence: Juan Foyth made his return from a hamstring injury after being named on the bench against the Gunners on Wednesday night. Ben Davies has done well at centre-back in recent games but I think Pochettino will recall Foyth against Everton this weekend.

That will allow Davies to move across to left-back and give Danny Rose a well earned rest while Kieran Trippier made a successful return to action following a groin problem. With Serge Aurier still out, Trippier is likely to keep his place at right-back.

Jan Vertonghen is still missing as he’s been ruled out until the New Year with a thigh injury but Davinson Sanchez is back in full training after overcoming a hamstring injury so he could be named on the bench this weekend.

Midfield: Pochettino has limited options in midfield as although Mousa Dembele is close to making his comeback from injury, the Everton game will come too soon while Victor Wanyama is also still on the sidelines.

Eric Dier is expected to resume full training next week after having his appendix removed but he’s still unavailable for now so Moussa Sissoko is expected to once again start alongside Harry Winks on Sunday with youngster Oliver Skipp on the bench.

Attack: Harry Kane wasn’t risked from the start against Arsenal due to a cold but he made an impact off the bench after setting up Dele Alli for the second goal and he should be fit to start against Everton at Goodison Park.

Alli should keep his place in the attack while I’d expect Christian Eriksen to start in this tricky away game before possibly being rested against Bournemouth on Boxing Day.

Hueng-min Son was among the goals again in midweek but I think he might get a breather on Sunday with Erik Lamela recalled while Lucas Moura may also drop to the bench. 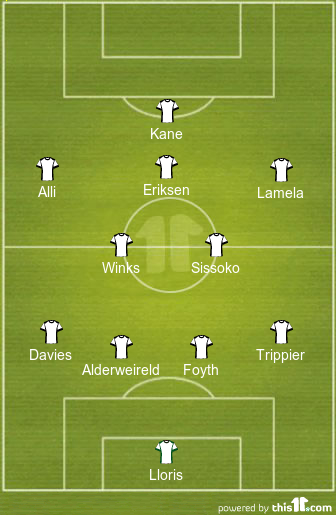