Chelsea take on Tottenham at Wembley in the first leg of their Carabao Cup semi-final on Tuesday. Here is the side I think Maurizio Sarri will select

Chelsea will look to secure a positive result when they take on Tottenham at Wembley in the first leg of their Carabao Cup semi-final on Tuesday night. Here is the side I think Maurizio Sarri will select for the game:

Goalkeeper: Willy Caballero was given a run-out in the FA Cup win over Nottingham Forest at the weekend but Kepa is expected to be recalled between the sticks tomorrow night.

Defence: We should see plenty of changes in defence with Antonio Rudiger recalled alongside David Luiz after being given a breather on Saturday afternoon. Andreas Christensen will be the man to make way.

Cesar Azpilicueta is also expected to come back in to the starting eleven with Davide Zappacosta dropping out while Marcos Alonso will replace Emerson Palmeiri at left-back as Sarri goes with his strongest back four.

Midfield: Cesc Fabregas is unlikely to feature after suffering cramp at the weekend and the midfielder is reportedly due to complete a move to Monaco soon so Jorginho will be recalled in the deep lying playmaker position.

N’Golo Kante will also come back in after being given a well-earned rest against Forest while Mateo Kovacic is fit to return after recovering from illness that kept him out of the FA Cup third round win. Ethan Ampadu and Ross Barkley will drop out.

Attack: Ruben Loftus-Cheek has been ruled out after aggravating a niggling back injury at the weekend and Chelsea will give late fitness tests to Pedro, Willian and Olivier Giroud ahead of the game.

Pedro has returned to full training following a hamstring injury while Giroud has missed out in recent games with an ankle problem but both could be back in contention to face Tottenham tomorrow night.

Willian missed the Forest game with a minor knock that he suffered against Southampton last week and the Brazilian attacker will also face a late fitness test ahead of the Spurs game.

Sarri won’t risk all three from the start but I’d be surprised if they aren’t at least included in the squad. Callum Hudson-Odoi could drop to the bench despite an excellent showing against Forest which saw him set up both goals.

Eden Hazard is certain to be recalled to the starting eleven while Alvaro Morata may keep his place up front after scoring twice on Saturday – although the Spaniard also missed a couple of sitters. 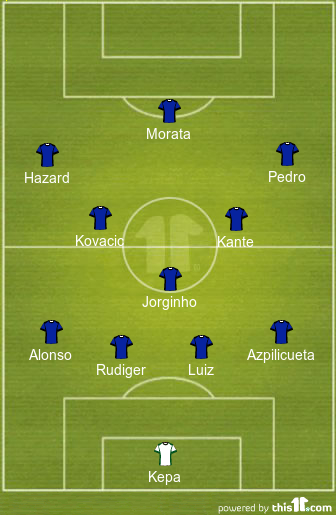