Manchester City will be looking to close the gap on leaders Liverpool when they take on Wolves at the Etihad Stadium this evening. Here is our preview

Manchester City will be looking to close the gap on leaders Liverpool when they take on Wolves at the Etihad Stadium this evening.

After a disappointing Christmas period, the Citizens have got their campaign back on track since the New Year and they blew the title race wide open after beating Liverpool 2-1 in a titanic clash on January 3rd to reduce their advantage to four points.

Jurgen Klopp’s side edged past Brighton 1-0 on Saturday to extend their lead to seven points so the pressure is on City to see off Wolves this evening and move back to within four points of the league leaders.

Pep Guardiola’s men have warmed up for the game in emphatic style as they followed up their 7-0 FA Cup win over Rotherham with a 9-0 humiliation of Burton Albion in the first leg of their Carabao Cup semi final.

However, Wolves should prove to be a much stiff test as they held City to a 1-1 draw in the reverse fixture and have also taken points off the likes of Arsenal, Tottenham and Chelsea this season while they also beat Liverpool in the FA Cup last week.

City may not risk Sergio Aguero from the start after he missed the last two games but Vincent Kompany should be back in the squad after recovering from a muscle problem.

Fernandinho will return in midfield after being rested recently but Benjamin Mendy and Claudio Bravo remain out with long term injuries.

Wolves have no fresh injury concerns to worry about and Rui Patricio, Matt Doherty and Romain Saiss are pushing for recalls. 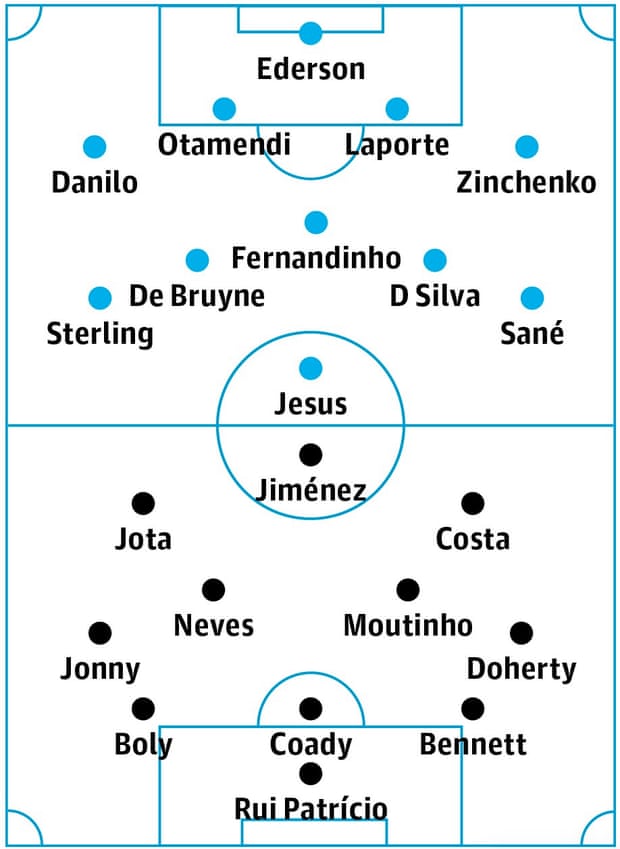 Obviously Man City are the heavy 2/11 favourites to win the game so it’s going to be difficult to find value in this match. Therefore, it’s important to take advantage of free bet offers and welcome bonuses to make the most of your money. City are the top scorers in the league and Wolves have scored against all of the other top six teams so far this season so I expect goals this evening. Over 2.5 goals at odds of 1/2 looks a certain bet but to get maximum value we can back both teams to score and a Man City win at odds of 9/5.

Our score prediction is Man City 3-1 Wolves and this can be backed with many bookmakers at 9/1 but if we add Kevin De Bruyne as the first goalscorer in a 3-1 win we get tempting odds of 103/1. That’s got to be worth a few quid of anyone’s money.