Man Utd take on Arsenal in the fourth round of the FA Cup at the Emirates on Friday. Here is the line-up I think Ole Gunnar Solskjaer will go with:

Manchester United take on Arsenal in the fourth round of the FA Cup at the Emirates Stadium on Friday night. Here is the line-up I think Ole Gunnar Solskjaer will go with:

Goalkeeper: David De Gea hasn’t travelled to London so it looks like Solskjaer is giving his number one a rest. Sergio Romero started in the third round win over Reading so he’s set for another run-out between the sticks.

Defence: Luke Shaw returns to the squad after recovering from illness which kept him out of the win over Brighton last weekend. Diogo Dalot should be the man to make way with Ashley Young keeping his place at right-back.

Victor Lindelof could retain his place in the middle of defence after a great run of form recently but Eric Bailly is pushing for a recall so he could replace Phil Jones against Arsenal.

Chris Smalling has returned to training but this game comes too soon for the England international so he remains out along with Marcos Rojo – who’s still working his way back from a shin injury.

Midfield: Solskjaer has gone with a settled midfield since taking over and I don’t expect him to divert too much from his preferred trio against Arsenal. Fred is back in contention after missing out recently following the birth of his baby while Andreas Pereira will also be hoping to feature.

However, I think we’ll see Nemanja Matic in the holding role once again with Paul Pogba and Ander Herrera in front of him. Marouane Fellaini continues to miss out with a calf injury.

Attack: Marcus Rashford has travelled to the capital after shaking off a minor knock but the youngster has started the last seven games and has been showing signs of fatigue so Solskjaer may be tempted to give him a rest.

That would open the door for Romelu Lukaku to be recalled up front after impressing off the bench in recent weeks while Jesse Lingard may retain his place ahead of Juan Mata in attack.

Solskjaer has confirmed Alexis Sanchez will feature against Arsenal and I wouldn’t be surprised to see him start against his former side with Anthony Martial given a breather. 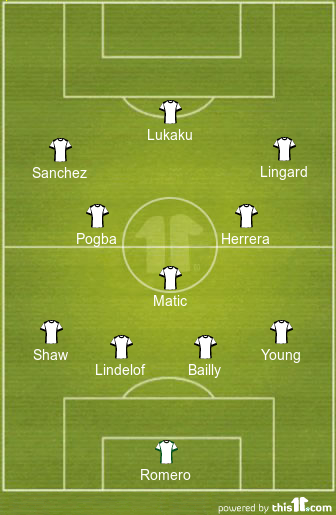