Here is our match preview ahead of Liverpool’s Premier League clash with Watford including team news, line-ups and prediction

Liverpool will be looking to cement their position at the top of the table with a win over Watford at Anfield on Wednesday night.

The Reds have seen their title-challenge stutter in recent weeks as they saw a healthy lead evaporate after dropping points to Manchester City, Leicester City and West Ham since the turn of the year.

However, Liverpool still sit one point clear of City at the top of the table after drawing 0-0 at Manchester United on Sunday so the title is still in their hands as we head in to the final 11 games of the season.

Tonight’s fixture at home to Watford represents an excellent opportunity for Liverpool to at least maintain their advantage and they’ll be hoping West Ham can do them a favour by taking points off City at the Etihad Stadium.

Watford head to Anfield in buoyant mood after thrashing Cardiff 5-1 in Wales at the weekend to move up to seventh in the Premier League table so they’ll be looking to continue their fine form with a positive result this evening.

Liverpool forward Roberto Firmino is a doubt after picking up an ankle injury during the draw with United on Sunday. Klopp has refused to rule the Brazilian international out of the game but the Reds are unlikely to rush him back too soon.

Daniel Sturridge will be hoping for a recall if Firmino is ruled out but Klopp may opt to deploy Mohamed Salah through the middle with Xherdan Shaqiri coming in to the attack.

Midfielder Naby Keita trained on Tuesday after recovering from illness but it remains to be seen if he’s deemed fit to start while Dejan Lovren remains on the sidelines along with Joe Gomez and Alex Oxlade-Chamberlain.

Watford have no fresh injury worries to contend with but Kiko Femenia remains out with a hamstring problem. 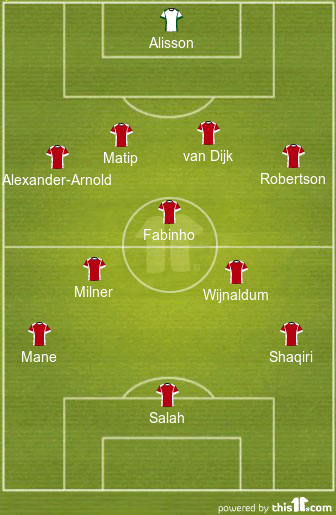 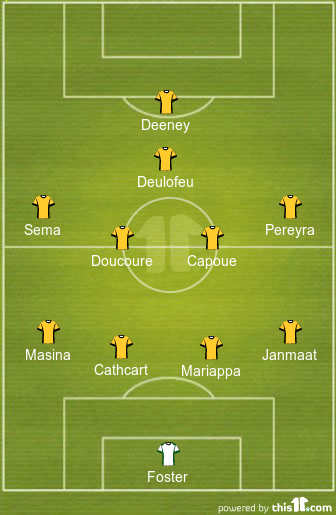 Liverpool 2-0 Watford: The Hornets have lost just once on the road since Boxing Day but they have been thrashed 6-1 and 5-1 in their last two trips to Anfield so they’ll be hoping to improve upon that record tonight. Liverpool have been formidable at home all season and Watford have lost 10 of their last 11 away games at Anfield so I can’t see past a home win this evening.