Manchester United need a win over Southampton at Old Trafford on Saturday afternoon. Here is the line-up I think Ole Gunnar Solskjaer will go with:

Manchester United will look to keep the pressure on the top four with a win over Southampton at Old Trafford on Saturday afternoon. Here is the line-up I think Ole Gunnar Solskjaer will go with:

Goalkeeper: There is no debate over who’ll start in goal as David De Gea is certain to continue between the sticks with Sergio Romero once again on the bench.

Defence: Man Utd are unlikely to make wholesale changes to the back four as they’ve been solid in recent weeks but Solskjaer may freshen things up ahead of next weeks crucial Champions League second leg at Paris Saint-Germain. Phil Jones could return from illness but Eric Bailly is also pushing for a recall and could replace Chris Smalling alongside Victor Lindelof in the middle of defence.

Luke Shaw is enjoying his football again and he should continue at left-back but we may see Ashley Young drop to right-back after his stint further forward during the 3-1 win at Crystal Palace. Diogo Dalot would therefore make way while Matteo Darmian and Antonio Valencia remain unavailable for selection.

Midfield: Solskjaer continues to have injury problems in midfield as Nemanja Matic remains on the sidelines with a muscle problem while Ander Herrera is also expected to miss the visit of Southampton with a hamstring injury.

Scott McTominay has done well for United in the last couple of matches so he could keep his place while Paul Pogba is certain to start as he’s suspended for the PSG game next week. Andreas Pereira is an option for Solskjaer but Fred could keep his place after a solid display at Palace.

Attack: Man Utd have problems in attack too as Anthony Martial is unlikely to be risked from the start after missing the last three matches with a groin injury so a place on the bench is probably the best he can hope for this weekend.

Jesse Lingard is set to miss out again after aggravating his hamstring injury against Liverpool while Juan Mata also picked up a hamstring issue at Old Trafford last week so Solskjaer has limited options to rotate.

However, United were boosted by the news that Marcus Rashford’s ankle injury wasn’t serious and he was named on the bench against Palace. The England attacker could now be recalled to start against Southampton on Saturday.

Alexis Sanchez should keep his place on the left side of attack while Romelu Lukaku is expected to lead the line up front after scoring two crucial goals during the win at Palace last time out.

James Garner, Tahith Chong and Angel Gomes could all be involved in the squad this weekend with the teenage trio vying for places on the bench. 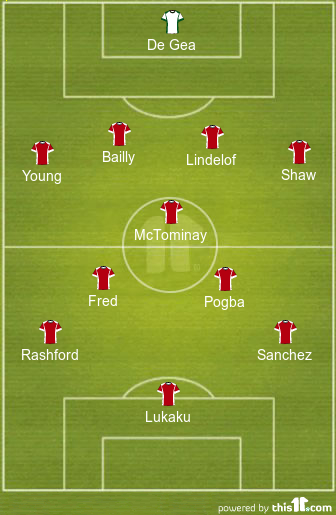