Arsenal take on Tottenham at Wembley on Saturday lunchtime. Here is the side Gooner Mac thinks Unai Emery will select for the game:

Arsenal will be looking to cement their position in the top four with a win over Tottenham at Wembley on Saturday lunchtime.  Here is the side Gooner Mac thinks Unai Emery will select for the game:

Goalkeeper: Bernd Leno was unfortunate not to keep another clean sheet during the 5-1 win over Bournemouth and he made a smart save while the score was still at 1-0 so no doubt he’ll keep his place between the sticks.

Defence: Emery deployed a back three/five during the win on Wednesday night and it’s a formation he’s favoured in the big games this season so I wouldn’t be surprised to see the boss stick with that system against Tottenham.

Laurent Koscielny picked up a minor ankle injury in midweek but he should recover in time to keep his place in the middle of the back three alongside Nacho Monreal and Sokratis meaning Shkodran Mustafi may miss out this weekend.

Carl Jenkinson put-in a surprisingly solid shift in the right wing-back role against the Cherries but Ainsley Maitland-Niles is pushing for a recall after recovering from illness and I think he’ll be recalled to the Arsenal eleven on Saturday.

Sead Kolasinac limped off with a minor muscle problem against Bournemouth but Emery says it’s nothing serious so I expect the Bosnian international to retain his place in the left wing-back role.

Midfield: Granit Xhaka was rested for Arsenal’s win over Bournemouth so the Swiss international is expected to be recalled against Spurs. Matteo Guendouzi made a mistake for their goal on Wednesday but he made up for it with a solid shift so it will be interesting to see who Emery goes with. Lucas Torreira has enjoyed an excellent partnership with Xhaka whenever they’ve played together so I think that may persuade the Arsenal boss to go with the Uruguayan over Guendouzi.

Attack: Mesut Ozil was back in the starting eleven against Bournemouth and he produced a superb goal-scoring performance so many are calling for the German to keep his place against Tottenham. However, there is a big difference between playing well at home against Bournemouth and turning up away to Spurs, and Emery has shown this season he doesn’t trust Ozil in the big away games. Therefore, I wouldn’t be surprised to see him dropping to the bench this weekend.

Alex Iwobi could come back in to the side after being named on the bench in midweek. The Nigerian attacker has been enjoying some fine form lately and I think Emery will pick him over Ozil for his work rate off the ball.

Henrikh Mkhitaryan deserves to keep his place in the Arsenal attack after a superb Man of the Match performance against Bournemouth and he’s really hitting some form during the second half of the season.

Alexandre Lacazette is pushing for a recall after coming off the bench to score a fine free-kick late time out against Bournemouth but I don’t see Emery leaving his top scorer out of the North London Derby so Pierre-Emerick Aubameyang is expected to start up front.

Lacazette would have to make-do with a place on the bench where he’ll join January signing Denis Suarez – who’s finding it difficult to adapt following his loan move from Barcelona. 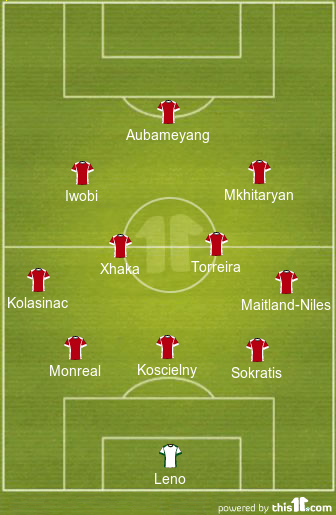