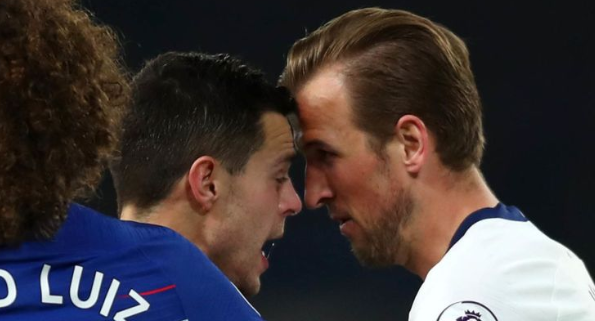 Tottenham have been handed a huge boost as Harry Kane wont face any retrospective action from the FA for an apparent headbutt on Cesar Azpilicueta and is therefore cleared to play against Arsenal and Liverpool.

Kane let his frustration get the better of him after aiming a headbutt at the Spanish international defender during the first half of Tottenham’s disappointing 2-0 defeat to Chelsea at Stamford Bridge last night.

Referee Andre Marriner took no action against the England captain at the time suggesting that he hadn’t seen the incident and Tottenham feared the striker would face a retrospective ban.

The FA were waiting to see whether Marriner included the incident in his match report before deciding whether to take any action. If the referee had said he didn’t see the headbutt, Kane could have faced a violent conduct charge that would have led to a three-match ban.

That would have ruled the 24-year-old hitman out of Saturday’s huge North London derby against Arsenal and the subsequent Premier League games with Southampton and Liverpool.

WATCH: @SpursOfficial's @HKane has escaped any retrospective action following an incident in last night's match against @ChelseaFC as it was seen by match officials at the time.

However, Tottenham have been handed a major boost as Sky Sports are reporting that Marriner HAS included the incident in his match report and says he dealt with the matter last night, so the FA won’t be taking any further action against Kane.

The news will come as a huge relief to Mauricio Pochettino as he tries to get Tottenham’s season back on track with a win over rivals Arsenal at Wembley on Saturday lunchtime.

Spurs have seen their title challenge derailed following consecutive away defeats at Burnley and Chelsea over the past week which has left them sitting just four points ahead of fourth-placed Arsenal.

A third defeat for Spurs on Saturday would see the Gunners move to within just one point and drag Tottenham in to a battle for a top four place so Pochettino will be delighted that Kane is available for the crucial games against Arsenal, Southampton and Liverpool.