Liverpool take on Everton at Goodison Park on Sunday afternoon. Here is the team we think Jurgen Klopp will select:

Liverpool will be looking to cement their position at the top of the Premier League table with a win over Everton at Goodison Park on Sunday afternoon. Here is the team we think Jurgen Klopp will select:

Goalkeeper: Alisson kept another clean sheet during the resounding 5-0 victory over Watford in midweek and no doubt the Brazilian international will continue between the sticks on Sunday.

Defence: Liverpool will once again be without Dejan Lovren as he’s still working his way back to full fitness from a hamstring injury while Joe Gomez remains on the sidelines with a fractured leg that’s hampered him since December so Klopp doesn’t have too much room to rotate at the back.

Therefore, Joel Matip should continue alongside Virgil van Dijk in the middle of the back four with Andrew Robertson keeping his place at left-back. Trent Alex Alexander-Arnold was outstanding against Watford after setting-up three goals so he should once again start at right-back against Everton.

Midfield: Jordan Henderson is pushing for a recall after being named on the bench on Wednesday night and I think we’ll see him starting in the Merseyside derby while Fabinho put in another impressive shift against Watford so he should keep his place in the middle of the park.

James Milner could make way after starting in the last two matches while Naby Keita is pushing for a recall but I think Georginio Wijnaldum will keep his place in midfield as he’s been a key player in Klopp’s side this season.

Attack: Roberto Firmino missed the win over Watford after picking up an ankle injury during the 0-0 draw with Manchester United last weekend. The South American forward has been able to return to training and will be assessed ahead of the game, however, I don’t think Liverpool will risk him from the start. Therefore, I expect Firmino to be named on the bench against Everton.

Divock Origi scored in midweek and was the hero in the last gasp win in the reverse fixture at Anfield earlier in the season but I think the Belgian international may drop to the bench on Sunday afternoon.

Xherdan Shaqiri is pushing for a recall so I think the Swiss winger may come in to join Mohamed Salah in attack while Sadio Mane is expected to keep his place after scoring two goals in midweek. 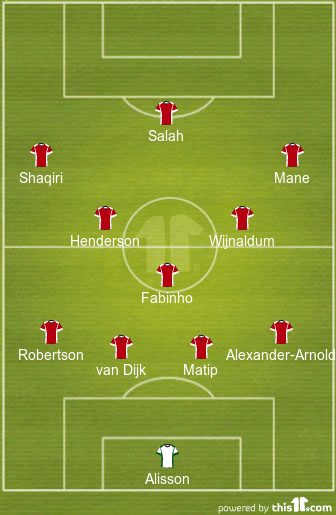