Man Utd will be looking to bounce back when they take on Man City at Old Trafford on Wednesday. Here is the line-up I think Solskjaer will go with.

Manchester United will be looking to bounce back from their defeat at Everton when they take on Manchester City at Old Trafford on Wednesday night. Here is the line-up I think Ole Gunnar Solskjaer will go with…

Goalkeeper: David De Gea has been uncharacteristically out of form lately but the Spaniard is still certain to keep his place between the sticks against City tomorrow night so Sergio Romero will once again be named on the bench.

Defence: Man Utd will be able to call upon Luke Shaw again after he completed a two-match domestic suspension and he’s set for an immediate recall at left-back. Diogo Dalot could start at right-back but I think Solskjaer might go with the experience of Ashley Young in the Manchester derby.

Phil Jones is expected to miss out after being forced off during the 4-0 defeat at Everton with a knock so Chris Smalling should continue alongside Victor Lindelof in the back four. Eric Bailly remains unavailable for selection.

Midfield: Man Utd will hand a late fitness test to Ander Herrera after he resumed training following a hamstring injury. United have certainly missed his tenacity in the middle of the park in recent games so I’m sure Solskjaer will give the Spaniard every chance to prove his fitness.

Nemanja Matic was poor against Everton [like most of his team mates] so I can see him dropping out with Scott McTominay being given a recall as United will want his youthful legs in the side to compete against a fluid City midfield.

Paul Pogba will also have been disappointed with his performance at Goodison Park but the Frenchman is still likely to keep his place against City so Fred could be the man to make way if Herrera is passed fit to start tomorrow night.

Attack: Solskajer is expected to freshen things up in attack after criticising his players following their humiliation against Everton and Anthony Martial was name-checked by the United boss as a player who needs to be producing more.

Therefore, Martial could find himself dropped to the bench against City with Alexis Sanchez pushing for a recall after a lively cameo at the weekend having returned to full fitness from a knee injury.

Marcus Rashford should keep his place in the Man Utd attack but Romelu Lukaku may find himself back on the bench after a frustrating afternoon against his former club at the weekend.

Juan Mata is another option for Solskjaer but I think the Man Utd boss will opt to give Jesse Lingard a recall as he knows how much the Manchester derby means and he’ll be fresh after being named on the bench at Everton. 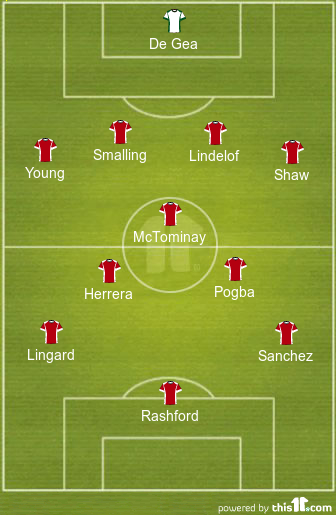