Chelsea take on Frankfurt in the first leg of their Europa League semi-final on Thursday. Here is the side I think Sarri will select for the game:

Chelsea will be looking to bring home a positive result from the first leg of their Europa League semi-final against Eintracht Frankfurt on Thursday night. Here is the side I think Maurizio Sarri will select for the game:

Goalkeeper: The Chelsea boss has stuck with number one goalkeeper Kepa Arrizabalaga for much of the Europa League campaign so I expect the Spaniard to keep his place with Willy Caballero once again on the bench.

Defence: Chelsea have been handed a major blow as Antonio Rudiger has been ruled out for three months with a knee injury that he sustained during the draw with Manchester United at the weekend so his season is over.

Gary Cahill hasn’t made the trip to Germany due to an Achilles injury so Sarri has no choice but to start Andreas Christensen alongside David Luiz in the middle of the back four.

Cesar Azpilicueta will obviously continue at right-back but we could see a change at left-back with Emerson Palmeiri coming in to replace Marcos Alonso despite the Spaniard scoring the crucial equaliser at Old Trafford.

Midfield: N’Golo Kante was able to recover from a minor hip injury to start against Manchester United at the weekend so the Frenchman should retain his place in the Chelsea midfield tomorrow night.

Jorginho is an integral part of Sarri’s system so the Italian international will continue in the deep-lying playmaker role but it will be interesting to see who joins Kante and Jorginho in midfield as Chelsea have plenty of options.

Mateo Kovacic performed well against United at the weekend while Ruben Loftus-Cheek has been seeing more regular first team action of late but I think Sarri will go with Ross Barkley against Frankfurt tomorrow.

Attack: Chelsea could make a couple of changes in attack as Sarri looks to freshen things up with Olivier Giroud expected to be recalled to lead the line up front and Gonzalo Higuain dropping to the bench.

This is a huge game for Chelsea so they are expected to resist the temptation to rest Eden Hazard ahead of Sunday’s Premier League clash with Watford so the Belgian international should once again start in the attack.

Callum Hudson-Odoi is out as he’s been ruled out for at least three months with an Achilles injury but Willian has been passed fit to travel to Germany after recovering from a minor knock which he sustained against United.

However, I think Pedro will be given the nod by Sarri to join Hazard and Giroud in the Chelsea attack tomorrow night so Willian may have to settle for a place among the substitutes. 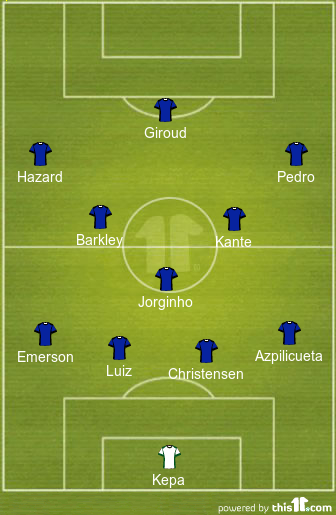