Chelsea take on Liverpool in the Super Cup in Istanbul on Wednesday night. Here is the team we expect Frank Lampard to select for the game:

Chelsea take on Liverpool in the Super Cup in Istanbul on Wednesday night. Here is the team we expect Frank Lampard to select for the game:

Goalkeeper: Kepa Arrizabalaga conceded four goals against Manchester United on Sunday afternoon but the Spaniard is still expected to retain his place between the sticks tomorrow with Willy Caballero on the bench.

Defence: Lampard will have been disappointed with how easy it was for United to rip the Chelsea defence apart in the second half but the Blues boss doesn’t have too many options to rotate against Liverpool.

Antonio Rudiger has travelled to Istanbul but he isn’t ready to start just yet after only recently returning to full training from a serious knee injury so Kurt Zouma is likely to keep his place alongside Andreas Christensen despite a poor showing at Old Trafford.

With Reece James injured and Davide Zappacosta out of favour it looks like Cesar Azpilicueta will continue at right-back but we may see a change at left-back with Marcos Alonso coming in for Emerson.

Midfield: Chelsea have been dealt a fresh injury blow with the news that N’Golo Kante picked up a knock during his second half appearance against Man Utd at the weekend so he’s highly unlikely to start against Liverpool tomorrow.

Therefore, Matteo Kovacic should continue alongside Jorginho in the two-man midfield in front of the back four.

Ruben Loftus-Cheek remains out with a long-term Achilles injury so he won’t be available for a while yet. Mason Mount was picked out for criticism by Jose Mourinho after the defeat on Sunday but Lampard defended his player and hinted at his pre-match press conference today that the youngster would keep his place against Liverpool tomorrow night.

Attack: Christian Pulisic is pushing to make his full competitive debut having come off the bench against United on Sunday so Ross Barkley may be the man to make room for the United States international in attack.

Willian travelled with the squad after failing to make the bench at the weekend but Lampard has confirmed the Brazilian will be named among the substitutes against Liverpool as he’s still lacking full match fitness.

Tammy Abraham had a frustrating afternoon against Man Utd and I wouldn’t be surprised if we see Olivier Giroud come in to lead the line up front against the Merseysiders with the youngster dropping to the bench. 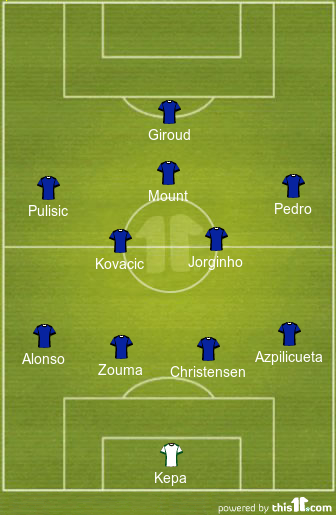