Liverpool take on Chelsea in the Super Cup in Istanbul on Wednesday night. Here is the team we expect Jurgen Klopp to select for the game:

Liverpool take on Chelsea in the Super Cup in Istanbul on Wednesday night. Here is the team we expect Jurgen Klopp to select for the game:

Goalkeeper: Liverpool were dealt a huge blow when Alisson limped out of the win over Norwich City with a calf injury on Friday evening. The Brazilian stopper is expected to be out for at least 3 weeks so it looks like Adrian is set for a run of games between the sticks.

Defence: Dejan Lovren hasn’t travelled with the squad due to an apparent illness but the Croatian international is being strongly linked with a move to Italy which may be the real reason for his absence. Joel Matip is pushing for a recall and he could replace Joe Gomez alongside Virgil van Dijk in the heart of the Liverpool back four.

I don’t think we’ll see any other changes in defence as Andrew Robertson and Trent Alexander-Arnold should continue in the full-back positions. They’ve established themselves as two of the best full-backs in Europe and are vital to Klopp’s system.

Midfield: Fabinho should keep his place in the holding role – although James Milner is an option if Klopp wants to freshen things up – while Jordan Henderson should also retain his place in midfield after another all-action display against Norwich.

Naby Keita was expected to be recalled against Chelsea, however, it looks like Liverpool have been dealt a fresh injury blow after the midfielder limped out of training with a suspected muscle injury this evening.

Georginio Wijnaldum wasn’t at his best during the win over Norwich so I wouldn’t be surprised to see the Dutchman make way and Alex Oxlade-Chamberlain could come in to start in midfield tomorrow evening. Adam Lallana is another option for Liverpool but I think The Ox will get the nod.

Attack: One of Klopp’s biggest decisions is whether to recall Sadio Mane to the starting eleven or give him more minutes off the bench as he looks to build-up his match fitness having returned late to pre-season following his exploits at the AFCON this summer.

Divock Origi did very well against Norwich on Friday and got himself on the score-sheet but I think the Liverpool boss may take this opportunity to give Mane a run-out from the start.

Mohamed Salah picked up where he left off last season with another goal on the opening weekend of the Premier League campaign and the Egyptian international is expected to start against Chelsea on Wednesday.

Roberto Firmino put-in another impressive shift in attack for the Merseysiders last time out and he really is a vital team player. I see no reason why the South American won’t continue up front with Salah and Mane in support.

It would be harsh on Origi to drop to the bench but he’ll be an excellent option for Klopp to have along with the likes of Rhian Brewster and Xherdan Shaqiri.

Here is how I think Liverpool will line up against Chelsea: 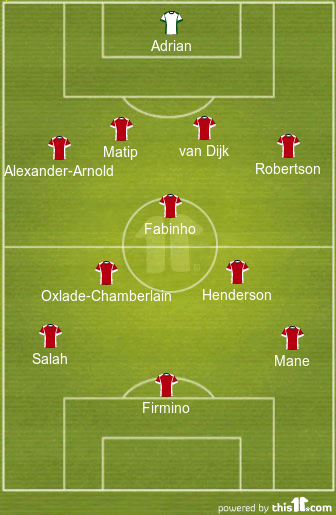