Arsenal take on Eintracht Frankfurt on Thursday evening. Here is the side Gooner Mac thinks Unai Emery will select for the game:

Arsenal will begin their Europa League group stage campaign with a tricky trip to Eintracht Frankfurt on Thursday evening. Here is the side Gooner Mac thinks Unai Emery will select for the game:

Goalkeeper: Emi Martinez is set to make his first appearance of the season with No.1 goalkeeper Bernd Leno being given a rest in the Europa League.

Defence: Sokratis hasn’t made the trip to Germany after making a crucial error during the draw at Watford on Sunday. Rob Holding is recalled in place of the Greek international after returning to full fitness following a knee injury and he’s expected to be handed a start tomorrow evening. Calum Chambers is also pushing to start but Emery may be reluctant to change both of his centre-back so Chambers may have to settle for a place on the bench.

Hector Bellerin and Kieran Tierney are back in full training but they have been left in north London to continue to work on their fitness and are likely to play for the U23s before Emery will consider them for the first team.

Sead Kolasinac is expected to continue at left-back but we may see a change at right-back with Ainsley Maitland-Niles given a rest. Shkodran Mustafi could be the man to come in as he’s played at right-back before.

Midfield: Emery has taken a strong squad with him to Germany but Granit Xhaka may be given a breather ahead of Sunday’s Premier League clash with Aston Villa. Lucas Torreira is expected to be recalled in the holding role. 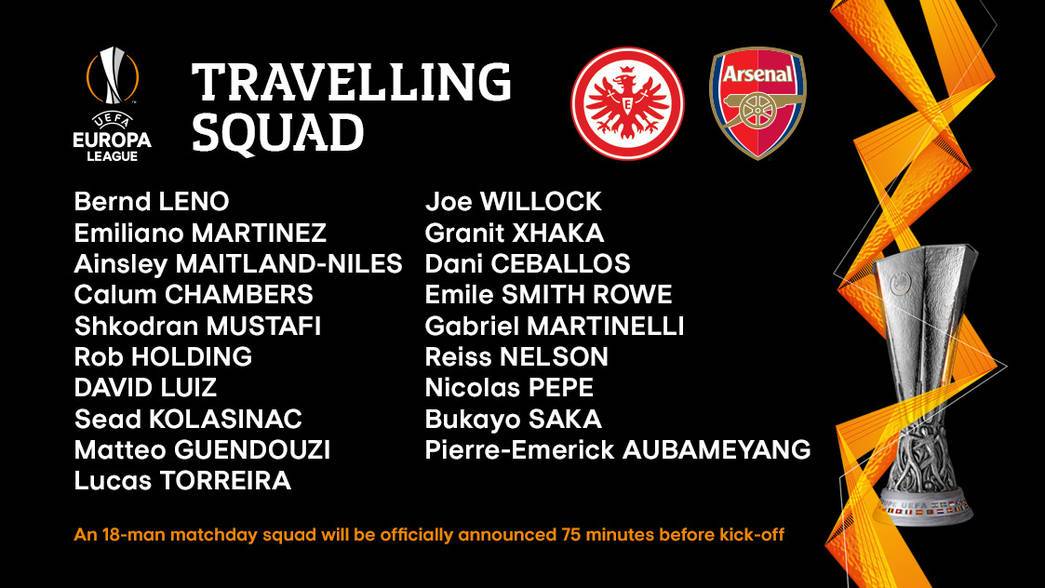 Matteo Guendouzi has played a lot of football already this campaign so the youngster may be dropped to the bench with Joe Willock pushing to be recalled in the middle of the park. The Arsenal boss may feel the Europa League is a good opportunity to give Dani Ceballos another run out as he continues to get used to his new team.

Attack: Arsenal will continue to be without Alexandre Lacazette as he’s still nursing an ankle injury. Many fans had hoped Pierre-Emerick Aubameyang would be rested but the Gabon hitman has travelled to Germany and is being tipped to start. Let’s just hope he comes through the match unscathed!

Nicolas Pepe struggled against Watford at the weekend so he’ll be hoping for a morale-boosting performance in Europe. Mesut Ozil has been left out of the travelling squad so there is a place up for grabs in attack.

Reiss Nelson is the man most likely to come in with Emery switching to a 4-3-3 / 4-2-3-1 formation after playing a diamond at the weekend. Nelson and Pepe would start on the wings and could switch flanks throughout the match.

Youngsters Buyako Saka, Gabriel Martinelli and Emile Smith Rowe would be options for Emery from the bench but I expect the Arsenal boss to go with a strong starting eleven for this tough match tomorrow.