Tottenham take on Bayern Munich in the Champions League on Tuesday night. Here is the side we think Mauricio Pochettino will select for the game:

Tottenham take on Bayern Munich in the Champions League group stages tonight. Here is the side we think Mauricio Pochettino will select for the game:

Goalkeeper: Hugo Lloris made a howler against Southampton to gift them what on another day could have been a huge goal but he was saved by Harry Kane. Despite his gaff, I still expect the Frenchman to keep his place between the sticks against Bayern with Paulo Gazzaniga on the bench.

Defence: Serge Aurier is facing a ban at the weekend after being sent off against Southampton but with Kyle Walker-Peters still struggling for full fitness, the Ivorian could keep his place in the Champions League tonight.

We might see Tottenham make a change at left-back as Pochettino has often rotated his full-backs in the Champions League so Ben Davies could replace Danny Rose. Davinson Sanchez is pushing for a recall after not featuring at the weekend but I suspect Poch may stick with Jan Vertonghen alongside Toby Alderweireld.

Juan Foyth is back in full training after an ankle problem but I think a place on the bench is the best he can hope for against Bayern while Ryan Sessegnon is still working his way back to full fitness following a hamstring injury.

Midfield: Tottenham have played with three in midfield in recent games but the system isn’t really working and they looked their best during the win over Crystal Palace when Pochettino went 4-2-3-1 so we could see him reverting to that formation against Bayern.

Moussa Sissoko has become an important part of the Spurs side so I expect him to keep his place while Harry Winks is almost certain to retain his spot as the deep-lying playmaker role in front of the defence.

Tanguy Ndombele was on the score-sheet against Southampton at the weekend but he’s still adjusting to life at Tottenham following his big-money move in the summer so I wouldn’t be surprised to see him make way if Poch does change formations.

Eric Dier, Oliver Skipp and Victor Wanyama are other midfield options for Tottenham but they’ll fight for places on the bench while Giovani Lo Celso remains on the sidelines with a groin injury that’s expected to keep him out until November.

Attack: Harry Kane rescued Tottenham at the weekend after scoring the winner when they were down to 10-men and the England hitman will once again lead the line up front this evening.

This is a big game for Spurs to show they can mix it with the big boys again this season so I don’t see Pochettino making too many changes. Therefore, Hueng-min Son could retain his place ahead of Lucas Moura.

However, we might see Dele Alli being recalled after he was named on the bench at the weekend with Christian Eriksen making way following a disappointing display against Southampton. Erik Lamela could also be set for a recall in attack. 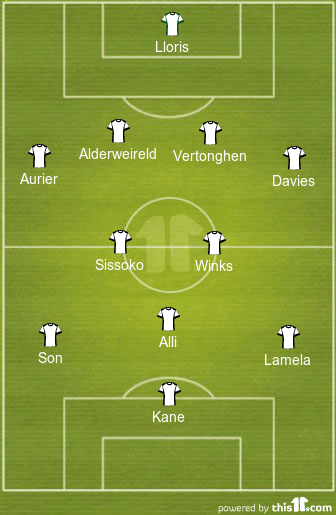