Tottenham take on Red Star Belgrade at the New Tottenham Stadium this evening. Here is the side we think Mauricio Pochettino will select for the game:

Tottenham will be desperate to get their season back on track with a win when they take on Red Star Belgrade at the New Tottenham Stadium this evening. Here is the side we think Mauricio Pochettino will select for the game:

Goalkeeper: With Hugo Lloris ruled out for several weeks after dislocating his elbow Paulo Gazzaniga is expected to continue between the sticks having started during the draw with Watford at the weekend.

Defence: Pochettino played a back three on Saturday but the Tottenham boss is expected to revert to a flat back four tonight with Toby Alderweireld tipped for a rest meaning Davinson Sanchez could start alongside Jan Vertonghen.

Ben Davies is likely to be recalled in place of Danny Rose as Pochettino rotates his full-back options while Juan Foyth is in-line to make his long-awaited comeback with a start at right-back having overcome his injury issues. Serge Aurier is expected to drop out.

Midfield: Pochettino confirmed at the weekend that one of Ryan Sessegnon and Giovani Lo Celso will be back in the squad tonight but he didn’t’ reveal which one it would be. Sessegnon has just recovered from a troublesome hamstring injury and hasn’t played at all this season so I think it’s more likely Lo Celso will be the man who’s recalled – although a place on the bench is probably the best he can hope for.

Harry Winks is expected to be rested with Tanguy Ndombele coming back into the midfield after being named on the bench against Watford. Eric Dier is also pushing for a recall but I think Moussa Sissoko will retain his place in the Tottenham midfield this evening.

Attack: Christian Eriksen missed the draw with Watford due to a dead leg but the Danish international could be back in contention this evening and I think he’ll return to the Spurs starting eleven if fit.

Hueng-min Son is also likely to be recalled after only being named on the bench at the weekend having arrived back late from international duty. Son made a big difference when he was introduced against Watford so I expect Pochettino will bring him back into the fold.

Dele Alli scored on Saturday but he’s unlikely to be risked again as starting him twice in four days might not be the best idea considering the problems he’s had with his hamstring this season.

Lucas Moura is also likely to drop to the bench so Erik Lamela is in-line for a recall with the Argentinean international supporting Harry Kane up front. 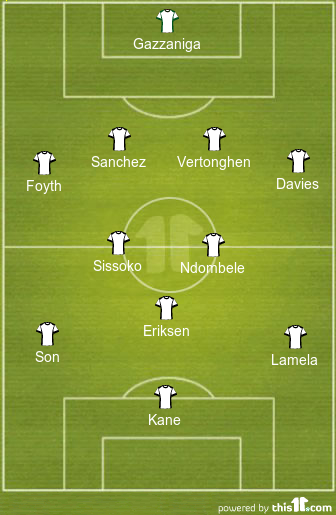