Chelsea take on Ajax at Stamford Bridge in the Champions League on Tuesday night. Here is the team we expect Frank Lampard to select for the game:

Chelsea will be looking to put one foot in the knockout stages of the Champions League when they take on Ajax at Stamford Bridge on Tuesday night. Here is the team we expect Frank Lampard to select for the game:

Goalkeeper: I don’t think there is much point deliberating for too long over who’ll start in goal as Kepa Arrizabalaga is certain to keep his place between the sticks with Willy Caballero once again having to settle for a place on the bench.

Defence: Lampard is unlikely to tinker too much with a 4-3-3 system that’s served him well lately but the Chelsea boss may be tempted to make one change to the back four that started during the win at Watford on Saturday.

Marcos Alonso is pushing for a recall at left-back so Emerson Palmeiri could drop out but Cesar Azpilicueta is expected to keep his place at right-back with Reece James named among the substitutes.

Antonio Rudiger has gone to visit a specialist as he’s still struggling to overcome a knee injury while Andreas Christensen is also still on the sidelines so Kurt Zouma will line-up alongside Fikayo Tomori in the middle of defence.

Midfield: Chelsea have been handed a major boost as N’Golo Kante is back in contention after recovering from a groin injury that’s kept him on the sidelines for the past month. The Frenchman took part in full training on Monday so could come back into the starting eleven tomorrow.

Jorginho is certain to keep his place at the heart of the Chelsea midfield as he’ll be suspended at the weekend after collecting five bookings. Kante’s return will put Mateo Kovacic’s place under threat but the Croatian international has been playing superbly well recently so Lampard may opt to play him alongside Kante and Jorginho in the middle of the park.

Ross Barkley remains a major doubt due to an ankle injury while Ruben Loftus-Cheek remains a long-term absentee with an Achilles injury.

Attack: If Kante and Kovacic start in midfield to help cope with a dangerous Ajax attack then we could see Mason Mount starting in a more advanced wide role tomorrow. He’s been excellent for Chelsea this season so I don’t see Lampard leaving him out.

Christian Pulisic has played his way into the Chelsea eleven following some superb performances in recent games so he may retain his place on the wing meaning Willian would be the man to make way.

Pedro remains out of favour so a place on the bench is the best he can hope for while Callum Hudson-Odoi may also have to settle for a place among the substitutes tomorrow night.

Tammy Abraham has made the striker role his own this season under Lampard so he should lead the line up front with Olivier Giroud and Michy Batshuayi named on the bench against Ajax. 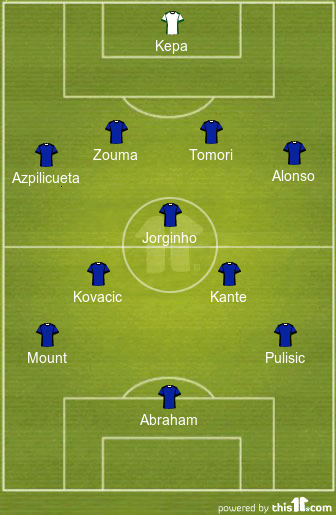