MLS star training with Arsenal ahead of potential move 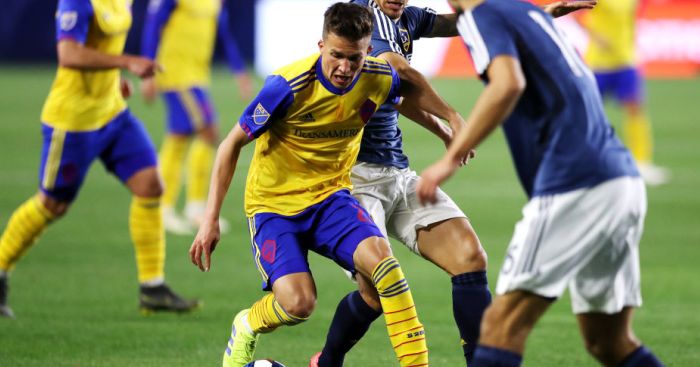 MLS star Cole Bassett is training with Arsenal this week as the young midfielder looks to secure a move to north London from the Colorado Rapids, according to TeamTalk.

Bassett joined the Colorado Rapids youth system in 2017 before breaking into the first team set-up in 2018 and he’s become a first team regular with 2 goals and 1 assist in his 20 appearances so far this campaign.

The 18-year-old was selected in the MLS Homegrown All-Star game following an impressive first season as a professional and it appears his potential has caught the eye of clubs here in Europe.

TeamTalk says Bassett spent time with Frieburg last season and the Bundesliga outfit made an offer to take him to Germany but the Rapids knocked it back in favour of keeping hold of the teenager for at least another year.

It looks like Arsenal have now made a move for Bassett as TeamTalk claims the midfielder will train with the Gunners U23 side this week with a view to a possible permanent move to the Emirates if he impresses.

Bassett has expressed his delight at being given the opportunity to train with his ‘favourite club’ and he’s hoping to be given the chance to test himself against the first team players while numbers are low during the international break.

However, no matter who he trains with, Bassett is desperate to learn during his time with Arsenal. He told the Denver Post:

“As most people already know, this is my favourite club. I don’t know which team it will be because it’s an international break for them. Hopefully, there will be a couple of guys missing with the first team and I can get with them. But I’m just excited to get over there and show up basically.

“When Arsenal came over here and played us, you could see there are little things that they do that I just don’t quite have yet. I’m eager to learn from them. Picking up things from every player will help improve my game. It’s going to be a great learning experience.”

The Colorado Rapids are also owned by Arsenal owner Stan Kronke so it looks like the connection between the two clubs may have helped facilitate Bassett being given the opportunity to train at London Colney this week.

We’ll have to see how the teenager does but he’s highly rated in the United States so he could be an interesting addition to the youth set-up if Arsenal decide to follow-up with a formal move for the midfielder.