This is our match preview ahead of Chelsea’s Champions League clash with Lille at Stamford Bridge including team news, line-ups and prediction

Chelsea take on Lille at Stamford Bridge in their Champions League group stage showdown this evening.

The Blues head into tonight’s final fixture sitting third in Group H on 8 points – level with Valencia and two points behind leaders Ajax – after drawing 2-2 in Spain two weeks ago.

Therefore, Chelsea need a win over Lille to guarantee their place in the knockout stages of the competition while a draw could also be enough if Valencia lose away to Ajax in tonight’s other game.

If Chelsea lose or can only match Valencia’s result and end up finishing on the same points, the Spaniard’s will progress due to their superior head-to-head record having won 1-0 at Stamford Bridge back in September.

Frank Lampard’s side have been plagued by inconsistent form all season and they go into tonight’s game having lost three and won just one of their last five games in all competitions so the Blues boss will be desperate not to slip up against Lille.

Chelsea have been handed a major boost as Antonio Rudiger is fit to make his long-awaited comeback after recovering from a groin injury that’s kept him on the sidelines for several weeks.

However, Fikayo Tomori has been ruled out with a hip injury and Olivier Giroud remains on the sidelines with a muscle problem. Ruben Loftus-Cheek is also still unavailable due to a long-term Achilles injury.

Jorginho and Emerson Palmieri are pushing for recalls while Tammy Abraham should lead the line up front after recovering from a minor hip problem.

Lille will be without Timothy Weah due to a long-term leg injury while Adama Soumaoro is also out with a thigh problem and Reinildo is a doubt with an ankle issue. 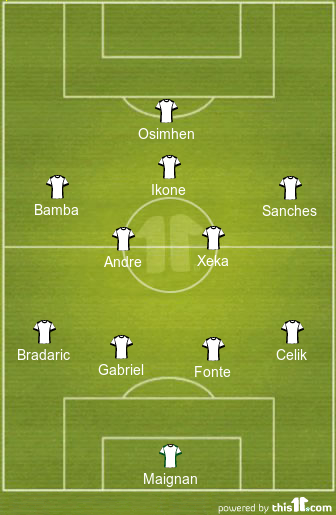 Chelsea 2-1 Lille: Chelsea won the reverse fixture 2-1 in France but it was a tight game that could have gone either way. A concern for Lampard is the fact Chelsea are winless in their last five Champions League games at Stamford Bridge but this is a good opportunity for them to improve upon that record as Lille have nothing left to play for. Striker Victor Osimhen is a real danger for the visitors but as long as they can keep him quiet, I think Chelsea will edge it to book their place in the knockout stages.