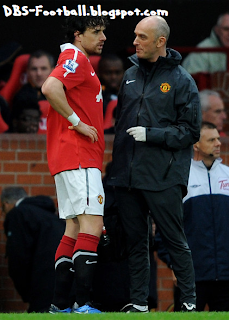 Manchester United have offered their unfortunate, injury prone midfielder, Owen Hargreaves a new deal to fend off interest from other clubs, which according to The Express, included United’s rivals, Arsenal.

Sir Alex Ferguson will be celebrating another Premier League title at United, and will hope to get Hargreaves to sign the one year deal.

The new contract is a pay-as-you-play deal as United try to avoid having to pay the Canadian born England international even when he is injured. Hargreaves has had to undergo several operations in his time at Old Trafford since signing from Bayern Munich in 2007.

His knees have been the major problem, but a hamstring injury on a return during this season and then a shoulder injury in March ruled him out for yet more games.

There was some talk of possible retirement with the persistent injuries constantly nagging at the 30 year-old midfielder. He is at the age when the body doesn’t recover as quickly, but he will surely be well up for a return to action once his current injury is over. His well known, tireless performances and tenacity in the midfield obviously still have their attractions – and rather surprisingly have attracted United’s rivals Arsenal.

The Express reported Arsenal’s interest in the player:

“But Sunday Express Sport can reveal that Arsenal are keen to land the 30-year-old on a free transfer.”

Hargreaves will not join Arsenal however, and is expected to sign the new deal offered to him by United. He feels that the support that has been offered to him by United in his dreadful time out with injury needs repayment, and the only way to pay Sir Alex and United back is by fighting for a starting place and showing the quality that brought him to United in the first place.