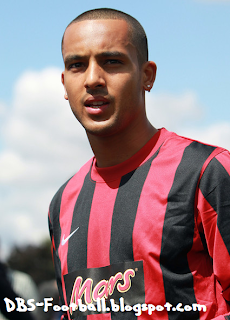 While Arsenal prepare for their busy summer, Theo Walcott discussed the possibility of some new additions to the Arsenal side. With Wenger open about the prospect of a summer which involves more transfer activity than usual, naturally, there are more rumours to contend with, one of which is Arsenal’s link to Real Madrid’s Karim Benzema.

Wenger has already expressed his interest in Benzema, but the young French striker is unlikely to be looking for a move away from Spain after his successful second season under Jose Mourinho in which he scored 26 goals in all competitions and assisted 9Not only that, but Benzema, who has a long term contract with Madrid would cost Arsenal and Wenger a lot of money – money that, although Wenger probably has, would not be willing to spend. Walcott has heard about these rumours:

“Its always nice to see new additions to the squad but maybe one player will attract more players and keep players.”

“I’ve heard rumours of Karim Benzema at Real Madrid. Someone like that would help you hold on to your best players, get the crowd on their feet as well.”

Meanwhile, as his manager comes under increasing pressure to bring big names to the club, the 23 year-old English winger was quick to defend his transfer policy and past record in the market, citing Thomas Vermaelen as a fantastic signing. It is true, Arsenal missed the Belgian centre back hugely over the season, and will gain a lot of confidence at the back thanks to his recovery and place back in the side. Walcott said:

“The manager knows what he’s doing, it’s up to him. He brought in Thomas Vermaelen and we’ve missed him because he’s a great signing.”

“The boss knows what he’s doing and he says he is going to spend so it will be interesting.”

Interesting it will be, but it will also be disappointing if Wenger fails to live up to the expectations he gave the Arsenal fans when he said  there would be a busy summer. Arsenal fans want to see some experience, some solidity, some more quality in their team that was lacking in much of this last season where they ended up withering away and finishing in a poor, poor, fourth place for Arsenal’s standards.