Arsenal have agreed a deal with Southampton to bring their young winger Alex Oxlade Chamberlain to the Emirates in a £12 million deal according to several news sources. It leaves both Liverpool and Manchester United, the two other clubs said to be… 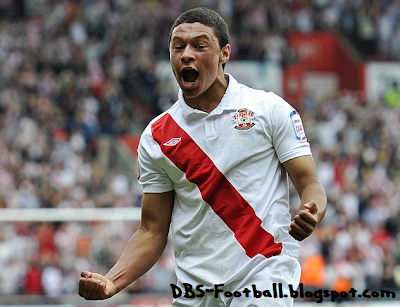 Arsenal have agreed a deal with Southampton to bring their young winger Alex Oxlade Chamberlain to the Emirates in a £12 million deal according to several news sources. It leaves both Liverpool and Manchester United, the two other clubs said to be in the race to sign the young English attacker defeated, in the shade as Arsenal make their second signing of the season.

Arsenal will unveil Oxlade-Chamberlain on the 1st July after tracking him for some time. Back in January, The Daily Mail claimed an “exclusive” that Arsenal had won the race for the player in a £5 million bid, which has clearly now been proved wildly inaccurate. At the time however, the players club Southampton would not settle for such a low fee, and demanded in excess of £10 million, which if we are to believe latest reports is what they have.

Oxlade-Chamberlain is only 17 years-old, and despite having clear potential, £12 million is both a lot of money for a young player and an uncharacteristically large amount of money for Arsene Wenger to spend. Having missed out on Phil Jones already, with Manchester United spending big, and Wenger being under increasing pressure to improve his team and win trophies, a swift transfer move is what is needed. Preferably, a successful one too, and at such a young age, the player will have plenty of time to prove himself.

But is another young signing what Arsenal need? Many fans have been calling for experience and quality rather than youth and potential which Wenger seems to prefer. Wenger’s first signing this summer was Carl Jenkinson of Charlton for £1 million, a 19 year-old defender, but if transfer links to Gervinho turn out successful, perhaps the faith that some have lost in Wenger will begin to emerge once again.

The player has been compared to Arsenal’s other English winger, Theo Walcott, and Chamberlain’s father, who used to be a footballer himself has encouraged his son to follow in Walcott’s footsteps and become and Arsenal player to learn under the guidance of Arsene Wenger. Mark Chamberlain said:

“Considering where he was at the beginning of the season and end of last season, to have the clubs we’ve been hearing about looking at him, he’s made great strides. But watching him and watching his performances I think it’s well deserved.”

“He’s only going to get better. A lot of people speak to me and say, ‘Maybe it’s too soon – look at Theo.’ But for me, I think Theo’s doing fantastic, he’s developing as a player, he’s still developing and he’s only young.”

“To develop at a place like Arsenal can’t be a bad thing. In my eyes, I’d like him to go there as soon as possible, and continue his development.”