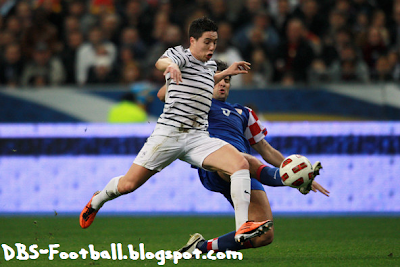 There is always one transfer story in the summer windows that drag on and grabs everyone’s attention for a few long months of rumours and speculation. This year, it is Samir Nasri, as he teases everyone about his Arsenal future and the prospect of joining rivals Manchester United, and while Wenger has recently stated that Arsenal “will do everything to keep Nasri at the club”, reports have emerged claiming that Arsenal would be “willing to listen” to offers for the player.

However, Arsenal will not entertain offers from Manchester United, they say, but would rather Nasri was sold to a team in Spain or Italy, that is, if Nasri does not sign a new contract. With 12 months remaining on his current deal, Arsenal will need to convince the Frenchman to sign a new contract now or risk losing him for free next season, which is surely not an option Arsenal want to have to use.

I recently wrote an article about why Nasri may prefer a move to Manchester United rather than staying at Arsenal, due to his positioning at Arsenal and the simple fact that he has more of a chance of winning trophies at United. However, what the player wants may not count for much if Arsenal are determined not to sell him to a fellow English club. It is thought that the German club Bayern Munich are interested in Nasri, while Inter Milan have also shown an interest in him.

Another area which has progressed over the past few weeks of rumours and gossip is his transfer value. Originally, many were quoting as little as £8 million as the bid that Manchester United were preparing, however, that has increased dramatically, to at least £20 million. The reason many were saying Nasri was worth £8 million was because of his short contract, but in a bid to scare off buyers, Arsenal have reportedly slapped the whopping price tag of £20 – 25 million on Samir Nasri’s head.
Wenger said recently:

“We will do everything to keep Nasri at the club. My wish is that he stays here. If he looks back he can see that he’s come quite a long way with us, and I think there is still a bit to do. It’s the club that makes the player’s career.”

Realistically though, if Arsenal’s reported transfer fee being demanded is met, surely Arsenal would seriously consider the sale. Nasri’s comments earlier in the month about waiting to see if the Manchester United interest was real has done no favours to his popularity among Arsenal fans who are looking for commitment, and from what he has said, he is not fully committed to the Arsenal cause.