When obviously talented footballers, particularly young ones, have an impressive tournament or good few games, they are routinely linked to the top clubs. But when that “link” turns into a reported bid, which is the case with Barcelona’s 20 year-ol… 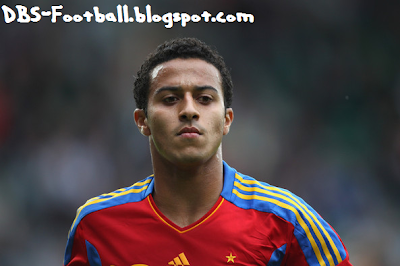 When obviously talented footballers, particularly young ones, have an impressive tournament or good few games, they are routinely linked to the top clubs. But when that “link” turns into a reported bid, which is the case with Barcelona’s 20 year-old midfielder, Thiago Alcântara, it starts to get interesting. Yes, Manchester United have apparently made a £15 million offer for Alcântara, who impressed during Spanish under-21 European Championship campaign in which they predictably won the trophy with a very talented side.

Paul Scholes’s style of play was often compared to the Spanish style, with slick and accurate passing, doing the simple things right nearly all of the time, and keeping the ball in the midfield perfectly. It is well known that United are looking for a replacement for Scholes, and now instead of having a player (of extreme quality) who is similar to a Spainiard, they can have the real thing, in a much younger form. Alcântara has a big future, but where his future lies will most probably be decided in the coming months.

According to some reports, Barcelona have offered Alcântara as part of a player plus cash deal for Arsenal’s Cesc Fabregas, as they look to save some money after spending about £35 million or more on Alexis Sanchez of Udinese. Alcântara would be a good fit at Arsenal, with their passing style, but Arsenal seem keen to hold onto their captain, and would only be likely to let go of Fabregas for money – more than what Barcelona have offered them. Perhaps if Barcelona were to sell Alcântara to United, they could raise enough money to please Arsenal with a decent bid for Fabregas.

So why is there so much interest in this 20 year-old Spanish midfielder, born in Italy to a Brazilian father called Mazinho who was a World Cup winner with his nation back in 1994? Well, first of all, he’s Spanish, and has been in Barcelona’s system since he was 14 years-old. That in itself is a very good start. He has clearly been brought up with football every day at a young age thanks to his father, and in his time in the Barcelona ranks will have learned the Spanish way of passing, moving and keeping the ball as well as all of the tricks and particulars that they thoroughly teach. But from what I have seen, he is doing what potential stars must always do – translate the football knowledge and love of football into performances on the field.

He has fantastic technique; his goal in the European Championship Under 21 final against Switzerland from 40 yards out showcases that in him, and he has a great range of passing. He has the ability and agility to squirm out of difficult situations when players have surrounded him, and will usually find a team mate from there – it seems to come natural to him.

He has quick and tricky feet, with a clever mind and vision to match, allowing him to set up attacks from very little, and he has the mature ability to know when not to try something too ambitious – doing the simple things well, such as passing and creating. In simple terms, he is the guy in the middle you pass to when you want something to happen. He is definitely a talent, and in his 20 first team Barcelona games, has scored four and assisted 3.

It’s easy to get carried away with a young talent such as this, as I have shown before, so I’ll slow down with some possible problems he could encounter with English football (and then counter them with good points). First of all, the matches I have seen of him have mostly been in the under 21 European Championships, which may flatter him, playing against younger, less developed and experienced players. The immediate step up to English football playing in the middle as the vital play maker in either the Manchester United or Arsenal side would certainly be a big challenge, though it can be said that he has impressed with the Barcelona first team, and they are currently the best team in Europe.

Another problem that has been mentioned is his height. He is quite small, standing at 5 feet and 7 inches, and it has been queried whether he could get crowded out in physical games in England. Lets put this into perspective; Andres Iniesta and Xavi are both 5 ft 7 inches, so Alcântara is taller than them both, and they coped fine in the Champions League final against United, and Paul Scholes is the same height as Alcântara, and we all know how succesful his United career was for almost 20 years.

Probably the only real, big issue, along with the risk of Alcântara not settling in England, is that, like Arsenal’s Fabregas, he may look for a return to his beloved Barca later in his career. That will be an unwanted and irritating burden on United, who have already gone through a similar transfer saga with Cristiano Ronaldo a few years back, but like Ronaldo, United or Arsenal could end up getting the best out of Alcântara, and selling him back to Barcelona for a large profit – it wouldn’t be such a bad deal after all.

While he may not be an immediate replacement for Paul Scholes, he has everything it takes to be that man in the near future, and if Arsenal want him to replace either Nasri or Fabregas, he is equally as capable. Now all they need to do is persuade Barcelona to let him go.