Arsenal make the long trip to face Sunderland in the FA Cup fifth round on Saturday evening. Here’s team news, likely line-up and predicted score for the game

Arsenal make the long trip North to face Sunderland in the FA Cup fifth round on Saturday evening.

Arsene Wenger has a huge task in trying to lift his players after Wednesday’s 4-0 demolition at the hands of AC Milan. It was one of the worst performances of the season from the Gunners and a similar display tomorrow will no doubt result in us being dumped out of another competition, and with it, leave us without silverware for the seventh consecutive season.

Make no mistake, the game with Sunderland is vital. To lose would surely dent this fragile squads confidence beyond repair. To be hammered by Milan 4-0 then go out the FA Cup would be a disaster heading into the big one next Sunday against Tottenham. A loss in that one could end our hopes of fourth place also.

We have to show we have the bottle to bounce back after a bad result but Martin O’Neill and Sunderland aren’t exactly the ideal opposition to make that statement. They are a decent side who, as we found out last week, will cause us problems.

Laurent Koscielny confirmed yesterday on his Facebook page that he hasn’t sustained any serious damage to his knee, but the Sunderland game should still be too soon for him. With Per Mertesacker also out, it looks like Johan Djourou will play alongside Vermaelen.

We have no other injury worries so with the exception of Kos, it’s the same squad that faced Milan. Alex Oxlade-Chamberlain has to come back in after Wengers gamble in dropping him mid-week backfired big-time. I would also like to see Arshavin given a chance in the ‘hole’ or the advanced central midfield role. Ramsey isn’t cut out for the job and Rosicky lacks and real cutting edge, so give the little Russian a go in his preferred position.

Here’s the team i would like to see selected. 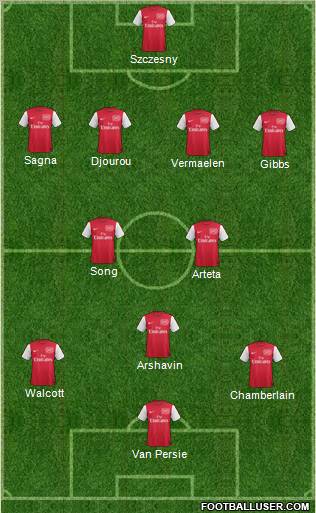 The whole game centres on how Arsenal respond to Wednesday’s disappointment. The players have to show they have what it takes to play for AFC. I’m going to play the optimist and back the boys to bounce back, but it wont be easy. I’m putting my head on the line and predicted another narrow 2-1 win for the Gunners!