Manchester United will be in the capital to take on Arsenal on Wednesday night. Here’s the latest United team news and predicted starting eleven for the game.

Manchester United will be in the capital to take on Arsenal at the Emirates Stadium on Wednesday night. Here’s the latest United team news and predicted starting eleven for the game.

David Moyes isn’t expected to make too many changes to his team, despite being held to a disappointing 2-2 draw by Fulham at Old Trafford on Sunday afternoon, with the United boss expressing his pleasure at how his side played and feels they just need more luck to turn things around.

Jonny Evans remains out with with a calf problem that’s kept him on the sidelines in recent weeks so Chris Smalling is likely to continue alongside Nemanja Vidic at the back with Rafael and Patrice Evra in the full-back positions.

Phil Jones could be back in the squad following concussion while Tom Cleverley will hope to be involved after being left out from the squad at the weekend, but Moyes may opt to stick with Darren Fletcher alongside Michael Carrick in midfield.

Adnan Januzaj made another impressive cameo off the bench on Sunday so is expected to come back in and start his first Premier League game in over three weeks. The big decision is how Moyes will decide to line-up his attack behind Robin van Persie, as Januzaj, Wayne Rooney and Juan Mata all like to play in the central role, but it’s likely that Rooney will get the nod to play in the ‘hole’ with Januzaj and Mata deployed on the flanks.

Here is the eleven we think Moyes will start tomorrow. 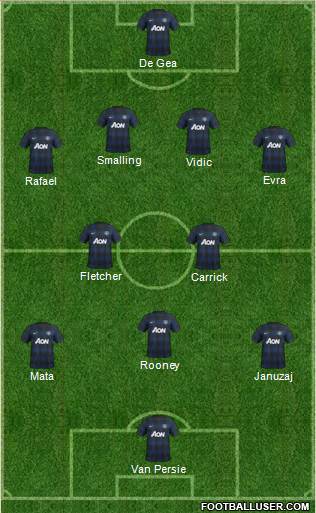 United head into the midweek fixtures sitting down in seventh place in the Premier League table, a full nine points adrift of fourth-placed Liverpool, so the defending champions will have to start picking up wins if they are to maintain hopes of clinching Champions League qualification and Moyes will be desperate to kick start their season with a victory at the Emirates on Wednesday.