Arsenal welcome champions Manchester United to the Emirates on Wednesday night looking to get their title challenge back on track. Here is out predicted team.

Arsenal welcome champions Manchester United to the Emirates on Wednesday night looking to get their title challenge back on track.

Arsene Wenger confirmed at his press conference this morning that he has no new injury worries to contend with for the game. Thomas Vermaelen remains out with a knee injury to Per Mertesacker and Laurent Koscielny are sure to continue at the back.

Bacary Sagna is another who is certain to start but I think we might see Kieran Gibbs come in for Nacho Monreal at left-back with the Englishman now back to full fitness.

Wenger has few options for central midfield as Aaron Ramsey is injured and Mathieu Flamini completes his three-match suspension, meaning Jack Wilshere and Mikel Arteta are likely to continue their partnership in the middle of the park.

Alex Oxlade-Chamberlain could be deployed centrally after his impressive display their against Crystal Palace last week but after two starts in succession, the youngster is likely to drop back to the bench having only recently returned from five months on the sidelines.

Tomas Rosicky could therefore come in with his work rate likely to be needed against United, and Mesut Ozil and Santi Cazorla should retain their places despite disappointing displays last time out at Anfield and they will support Olivier Giroud up front.

Here is the team Wenger could go with: 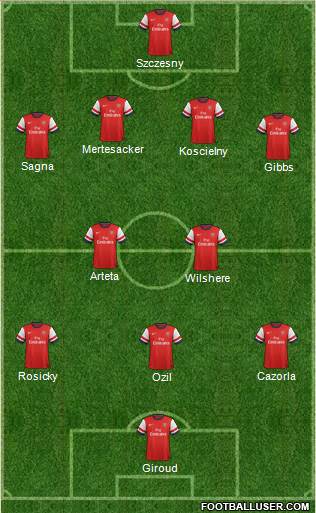 The worry for Arsenal may be the lack of pace in this team but without the injured Theo Walcott and with The Oxe likely to be rested, Wenger doesn’t have a lot of alternatives. Serge Gnabry is one player who could offer some raw pace, but the youngster is unlikely to start such a huge game for the Gunners.

Arsenal dropped to second place in the Premier League following a 5-1 drubbing by Liverpool at Anfield on Saturday so Arsene Wenger will be desperate to get back on track with a convincing win tomorrow.

We’ll have the predicted Manchester United team up shortly….