Arsenal take on Hull City at the KC Stadium on Sunday afternoon looking to cement their place in the top four. Here is Gooner Mac’s predicted starting line-up.

Arsenal take on Hull City at the KC Stadium on Sunday afternoon looking to cement their place in the top four. Here is Gooner Mac’s predicted team.

It’s been a tough week for the Arsenal players with the boys having to dig deep to come from behind to beat West Ham on Tuesday with that game coming just 72 hours after our gruelling FA Cup clash with Wigan, so Arsene Wenger is going to have to rotate his squad wisely this weekend.

Kieran Gibbs has been ruled out after failing to recover from the hamstring injury that kept him out in midweek while Nacho Monreal is also a doubt with a leg problem he picked up last weekend. The Spaniard will have a late fitness test but I’d be happy for Thomas Vermaelen to remain at left-back as he filled in well on Tuesday.

I’m expecting Aaron Ramsey to start in midfield but who partner him is still up for debate. Mathieu Flamini is back from suspension and could come in but I have a feeling Arsene may stick with Mikel Arteta, despite the Spaniard no doubt feeling the effects of the last two games. The boss rarely drops or rests Arteta and with this being a ‘must win’ game, I think he’ll start once again.

Alex Oxlade-Chamberlain wasn’t fit enough to take part on Tuesday but he should be okay to come back in this weekend but the big question is will he be joined by Mesut Ozil? The German is back in contention after five weeks out with a hamstring injury and I personally think Arsene will opt to introduce him as a second half substitute and not throw him in from the start.

Santi Cazorla put in a MOTM display in midweek while Lukas Podolski also deserves to start after his excellent brace, while Olivier Giroud will spearhead the attack.

Jack Wilshere, Serge Gnabry and Theo Walcott remain out injured, while Abou Diaby is still working his way back to fitness after a year out with a knee injury.

Here’s the team I think we’ll see on Sunday: 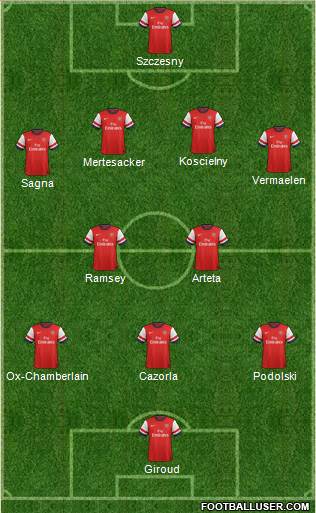 This team should be good enough to get a result against Hull and even if we’re struggling, we’ll have the likes of Ozil and Rosicky to call upon from the bench. A win would ensure we stay fourth and hopefully Man Utd can do us a favour against Everton.

What team would you start this weekend? Share your views below.