Arsenal face Besiktas at the Emirates tonight in the second leg of our Champions League play off with a place in the group stages at stake. Here’s a preview.

Arsenal face Besiktas at the Emirates tonight in the second leg of our Champions League play off with a place in the group stages at stake.

A disappointing 0-0 draw away in Turkey last Tuesday leaves the tie in the balance and we missed the opportunity to make it a far more comfortable evening tonight that it may turn out to be.

Aaron Ramsey got himself sent off for two silly bookings but even with 10-men we could have come away with a vital away goal had Alex Oxlade-Chamberlains shot gone in off the post in the final minute.

Winning this game is worth an estimated £25m, but losing it would cost us a hell of a lot more as the pressure on Arsene Wenger would be immense if he fails to take us to the group stages of the competition for the first time in 19 years.

Besiktas worked hard last week but they lacked quality and the only real threat they have is former Chelsea striker Demba Ba, so if we can keep him under wraps we should be confident of getting the win we need to progress.

Olivier Giroud is out of the game and he faces at least three months on the sidelines after breaking a bone in his foot during the final stages of our 2-2 draw at Everton on Saturday.

It’s going to be interesting to see who Arsene Wenger opts for up front, but I think we’ll see Alexis Sanchez once again start through the middle despite the Chilean struggling during the first half at Goodison Park.

Kieran Gibbs is out with a hamstring strain so Nacho Monreal will continue at left-back, while Laurent Koscielny is expected to return after missing the Everton game with his troublesome Achilles.

Aaron Ramsey is suspended and Mikel Arteta has an ankle injury so Jack Wilshere and Mathieu Flamini should start in central midfield, and Santi Cazorla is expected to be recalled having been among the subs against the Toffees. 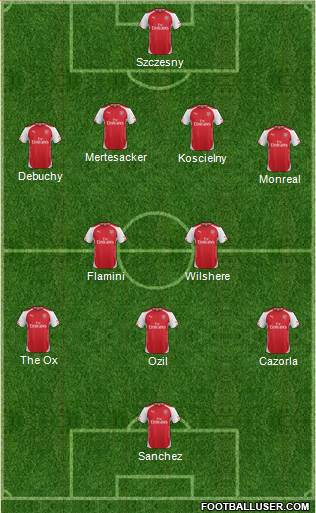 Arsenal 3-0 Besiktas: I was impressed by the Turks work-rate last week and I expect they’ll be up for it again tonight, but I think with us playing at home on a far better pitch, we’ll have way too much for them.

What team would you put out and what’s your predicted score?