Arsenal midfielder Aaron Ramsey has told reporters that he thinks he’ll be fit to face Manchester City on Saturday despite picking up an ankle knock on Tuesday. 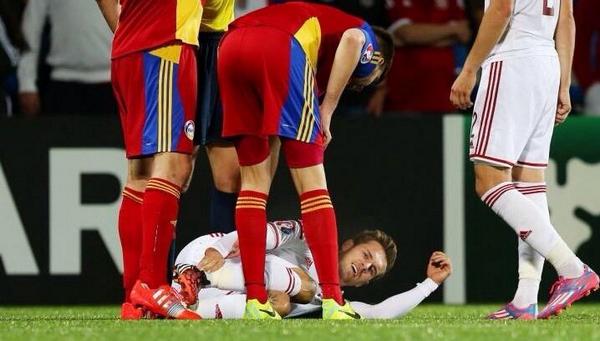 Arsenal midfielder Aaron Ramsey has told reporters that he’s hoping to be fit to face Manchester City on Saturday despite picking up an ankle knock on Tuesday night.

The 23-year-old was forced off during the closing stages of Wales’ 2-1 victory over Andorra in their Euro 2016 qualifier last night after turning his ankle in the artificial 3G pitch.

Ramsey was seen limping off the field as he was replaced in the final minute of the game prompting fears he could be set for a spell on the sidelines starting with this weekends crucial clash with Manchester City at the Emirates.

However, the midfielder has played down those fears after telling the Guardian newspaper that he hopes to be fit to face the champions this weekend.

“I’ll be alright – the pitch was very hard there’s no give in it so I rolled my ankle a bit,” he said.

“Hopefully it will be nothing and I’ll be available for Saturday. These are the games you want to play in and I’m looking forward to it.”

The news will come as a huge relief to Arsene Wenger as Ramsey has become a key player for us over the past 18 months. He may not have hit top form just yet this season but he’s still chipped in with two goals, including the winner against Crystal Palace, and he’d be a big miss if he was ruled out for any period of time.

No doubt he’ll still have further tests to make sure there is no damage so we’ll have to see how things develop over the next 24 hours, but at least the player is confident there is no serious problem and he could be available to face City on Saturday.