Premier League action returns this weekend as Manchester City take on Arsenal at the Emirates Stadium on Saturday lunchtime. Here is our predicted City line-up.

Premier League action returns this weekend after the international break as Manchester City take on Arsenal at the Emirates Stadium on Saturday lunchtime. Here is our predicted City line-up.

Goalkeeper: Manuel Pellegrini has opted for Joe Hart ahead of Willy Caballero so far this season so I expect that to continue.

Defence: City are sweating on the fitness of Pablo Zabaleta after he was forced off during Argentina’s friendly win over Germany last week. If he fails a late test it would see Bacary Sagna face his former club, but Zabaleta told the clubs website earlier this week he’s confident of being fit so who am I to argue.

Alexandre Kolarov should get the nod over Gael Clichy at left-back while Pellegrini is expected to stick with Martin Demichelis alongside Vincent Kompany despite new signing Eliaquim Mangala pushing to make his first start.

Midfield: Fernando is struggling to shake off a groin problem that forced him off against Stoke so Fernandinho is expected to play alongside Yaya Toure in the heart of midfield.

Attack: David Silva is a cert to start while Samir Nasri is likely to face his former side once again. Sergio Aguero is fit and could be deployed in the No.10 role just off main striker Edin Dzeko, although Stevan Jovetic is pushing to keep his place after some impressive performances this season.

You can see our predicted Arsenal XI here

Here’s how City could line-up this weekend: 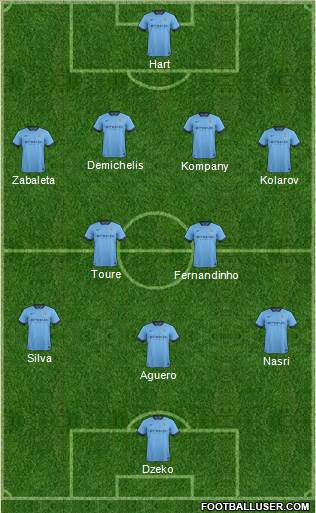