Arsenal defender Mathieu Debuchy has told fans he’ll come back stronger after being cruelly ruled out for 3 months with an ankle injury. See what he said here 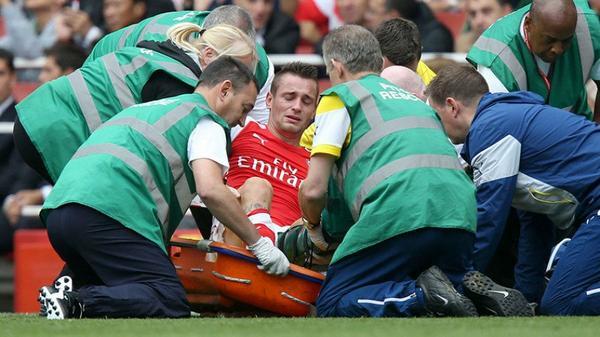 Arsenal defender Mathieu Debuchy has told fans he’ll come back stronger after being cruelly ruled out for 3 months with an ankle injury.

The French international was stretchered off during the closing stages of our 2-2 draw with Manchester City earlier this month after appearing to catch his studs in the turf.

Initial hopes were that the 29-year-old could be back playing again inside 6 weeks after scans revealed ligament damage to his left ankle.

However, further exploratory tests on Friday revealed the need for surgery and Arsenal confirmed on Monday afternoon that Debuchy has now gone under the knife and will be out for around 3 months.

“He has had surgery and will be out for three months,” Wenger told Arsenal.com. “A reasonable delay is three months.

“It is a blow of course, how big it will be we will only know afterwards because it will be down to how well we replace him. We bought [Calum] Chambers for that.”

Debuchy has since taken to Twitter to post a message to fans, thanking them for their support before vowing to come back stronger from this latest injury. He said:

“Thanks everyone for all your messages and your support! I will be back stronger!!.”

Obviously it’s a huge blow to lose Debuchy for three months as the Frenchman has settled in very well following his move from Newcastle in the summer and looked to be an excellent replacement for Bacary Sagna.

This setback means we won’t be seeing him again until around Christmas time so the big problem is who’s going to fill in at right-back. Hector Bellerin is pushing for a first team spot after impressing for the Under-21’s but Arsene Wenger has hinted that Calum Chambers may be the man for the job, so it’s going to be a huge test for the former Southampton youngster over the coming months.