The summer transfer window may be closed but managers are already thinking ahead to future transfer windows so we’ll bring you all the latest news and gossip. Today, Man Utd line-up a move for Valencia’s Nicolas Otamendi. 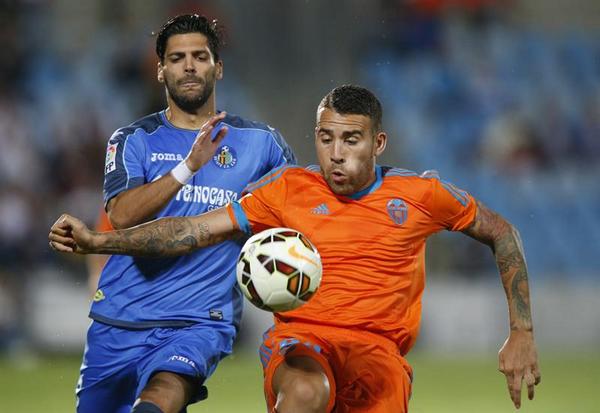 Manchester United boss Louis van Gaal is lining-up a January swoop for €50m-rated centre-back Nicolas Otamendi as he looks to solve the clubs defensive woes, according to reports.

United have endured a disappointing start to the new season after winning just one of their opening five games, and their latest defeat came with a thrilling 5-3 loss away at Leicester City on Sunday.

New boss Louis van Gaal spent over £150m in the summer re-vamping the squad he inherited from David Moyes but the majority of the money was spent on bringing in top class attacking talent like Angel Di Maria and Radamel Falcao.

Luke Shaw and Marcos Rojo were brought in to replace the likes of Rio Ferdinand, Nemanja Vidic and Patrice Evra after the long-serving trio left Old Trafford in the summer, but a spate of injuries left van Gaal short at the back and many pundits have been calling for him to bring in a world class central defender this winter.

It looks like the Dutchman is ready to listen to his critics as the Express claim that he has identified Valencia’s Nicolas Otamendi as the man to solve his problems at the back and is lining-up an audacious move when the transfer window reopens in January.

Otamendi only joined Valencia from Porto in a £9.5m deal last year and spent the second half of last season on loan at Brazilian side Atletico Mineiro before returning to his new club in July where he’s gone on to establish himself as an important first team player this campaign.

The newspaper suggests that United are ready to step up their interest in the 26-year-old but it’s believed the Spanish outfit see him as a vital part of their team and will demand they pay the full value of the players €50m (£40m) buy-out clause.

It remains to be seen whether United would be willing to pay anywhere near that kind of money for a player who’s yet to cement himself as one of the top players in European football, but even if United do make a formal move they could face stiff competition for his services as the Express stating that Chelsea have also been linked with a move for Otamenti as Jose Mourinho looks for a long-term replacement for skipper John Terry.

However, I think it’s highly unlikely either Chelsea or United would meet the Argentinean international’s €50m buy-out clause, so unless Valencia lower their demands or the player forces a move, I don’t see anything happening in January, so van Gaal and Mourinho may have to look elsewhere if they want to strengthen their defences this winter.