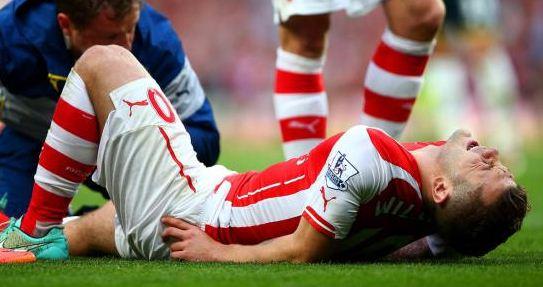 The Gunners were left sweating on the fitness of Wilshere after he picked up yet another ankle injury during Saturday’s 1-1 draw with Tottenham Hotspur.

The 22-year-old received treatment midway through the first half after twisting his ankle and although he carried on, it was clear he wasn’t comfortable and he was eventually replaced in the 63rd minute.

There were fears the midfielder had aggravated his troublesome ankle injury, however, the Mirror are reporting that following tests at London Colney on Monday afternoon, Wilshere has been given the all-clear to face Chelsea in this weekends crucial London derby, while the newspaper suggests that he could even feature against Galatasaray on Wednesday.

The news will come as a major boost to Arsene Wenger with the Arsenal boss facing a growing injury crisis both in defence and in midfield. We brought you the news earlier that Laurent Koscielny is the latest injury doubt as he’s struggling with an on-going Achilles problem. If ruled out, the Frenchman would join Mathieu Debuchy and Nacho Monreal on the sidelines leaving Wenger with few options at the back.

The Gunners boss also has problems in the middle of the park with Aaron Ramsey facing at least a month out with a hamstring strain while Mikel Arteta is also out until after the international break with a calf issue that he too picked up against Spurs.

With two central midfielders already ruled out, it’s a huge boost to Wenger that Wilshere has not suffered any lasting damage as he’s going to be a vital player for Arsenal over the next few weeks.