Arsenal have been hit by another injury blow with Tomas Rosicky set to be assessed after picking up a muscle injury while on duty with the Czech Republic. 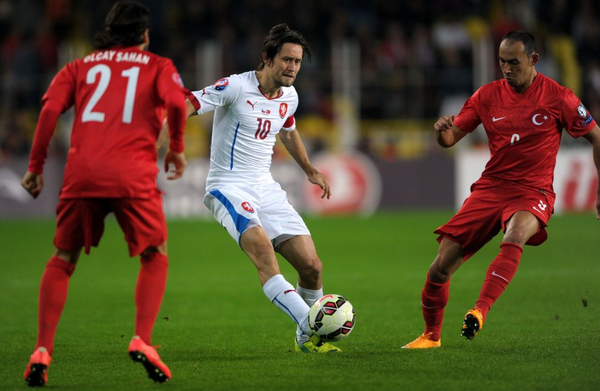 Arsenal have been hit by yet another injury blow with Tomas Rosicky to be assessed on Wednesday after picking up a muscle injury while on duty with the Czech Republic.

Rosicky started for his country in Friday’s Euro 2016 qualifier against Turkey and completed the ninety minutes during a 2-1 win in Istanbul to ensure the Czech Republic maintained their 100% start to their qualification campaign.

However, it appears the 34-year-old has picked up a knock during the game as he was forced to sit out of last nights 4-2 win over Kazakhstan with the midfielder confirming to reporters that he is unable to move freely due to swelling in his muscles.

“I couldn’t do any sharp movement, couldn’t sprint. If I tried to play in one tempo, I wouldn’t make any difference for the team.”

“I’ll come back to London and we’ll see. The doctor said I have something swollen between the muscles.” Rosicky is quoted as saying in the Mirror.

Rosicky will now head back to North London and is expected to be assessed by Arsenal’s medical team at London Colney on Wednesday to determine the full extent of the problem.

The news comes as another blow to Arsene Wenger who is already facing up to losing Mesut Ozil for at least two months after Germany found he had a partial tear in his knee ligament, while Laurent Koscielny and Danny Welbeck also picked up knocks while on international duty.

Rosicky has been a peripheral figure in the first team this season but he’s a useful player to have off the bench, so he’ll be a big miss if he is ruled out for any period of time. Let’s hope for some good news later in the week….