Chelsea striker Loic Remy doesn’t think his groin injury is serious and he still hasn’t given up hope of making an early return to face Man United on Sunday. 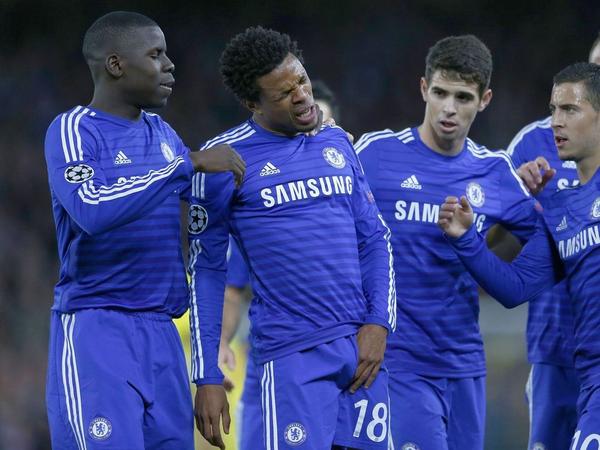 Chelsea striker Loic Remy has revealed that he doesn’t think his groin injury is serious and he still hasn’t given up hope of making an early return to face Manchester United on Sunday.

Remy started during Chelsea’s Champions League clash with Maribor on Tuesday night but was forced off early after appearing to pull his groin while firing home the opener in the 13th minute.

Jose Mourinho claimed after the game that the French international would miss this weekends trip to Old Trafford as the injury would keep him on the sidelines for at least a couple of weeks.

“Loic Remy has a problem in his groin,”

Remy was only playing because first choice striker Diego Costa is out with a niggling hamstring injury that’s also expected to keep him out for at least another week, so Chelsea were facing the very real possibility of facing United with just Didier Drogba to choose from up front.

However, Remy has now revealed that he felt his groin tighten up even before he scored his goal but is thankful he stopped when he did to prevent causing any further damage.

The 27-year-old went on to say that he doesn’t think his injury is anything serious and hopes to be passed fit to play this coming weekend. Remy told the Express today:

“We will see with the scan but I really hope it is not too bad.

“Fortunately I stopped playing because I felt something.

“I don’t think it is too bad but I felt something in my groin.

“It was before I shot for my goal. It was a bit stiff, even my run and I didn’t feel very comfortable. That’s why I prefer to come off but for me I have to care about myself and if I’m not feeling very good it’s better to leave for another player who is 100 per cent.

“I don’t think it is really bad. We will check and I really hope to play again this weekend.

“It’s frustrating of course because I had a chance to play because Costa is injured but I am not afraid.

“It is a huge game but every game is tough. Especially this one because it is a big game against a good opponent but I will try to recover as quickly as possible.”

It wouldn’t certainly be something of a surprise if Remy was to play any part against United as he looked in some discomfort when he limped form the field on Tuesday night, but stranger things have happened.

Should Remy and Costa both miss the game then Didier Drogba will lead the line for the Premier League leaders. The 36-year-old isn’t match fit himself as he’s only just returned from a month out with an ankle injury, but Mourinho’s only other choice is to throw in 17-year-old Dominic Solanke after the teenager made his senior debut against Maribor last night.