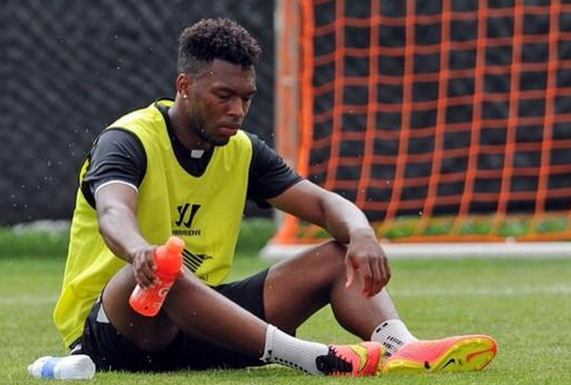 Liverpool boss Brendan Rodgers has spoken of his disappointment at Daniel Sturridge picking up yet another injury and described the moment the striker suffered his latest set-back as an ‘innocuous flick’.

Sturridge was set to return to action for this weekend’s clash at Crystal Palace after missing the last two-and-a-half months with thigh and calf injuries.

However, news emerged earlier this week that the striker would miss the trip to the capital after suffering a fresh thigh injury in training and is now facing another six weeks on the sidelines.

Reds boss Brendan Rodgers has now spoken out on the latest set-back and revealed that Sturridge picked up the injury while simply flicking the ball during a training session.

Unbelievably, it’s the ninth time in his career that the 25-year-old has picked up a thigh injury having been plagued by similar problems during his time with Manchester City and Chelsea, and Rodgers revealed that the club’s medical team are now looking into a way to resolve the issue once and for all.

“That’s his ninth injury on that thigh from previous clubs and here. So there is an issue there somewhere. It’s something that the medical team are looking into.”

“This shows a slight tear just below where he had a previous injury. Obviously it was in a session and quite an innocuous action, he did it when he just flicked the ball. But obviously he felt the pain and then when the medical team told me the next day after the scan it was disappointing.” Rodgers is quoted as saying by the Telegraph.

Rodgers is now expected to meet with Sturridge this afternoon to plan his rehabilitation but coming up with a strategy to ensure he doesn’t suffer any further thigh injuries is also going to be top of the agenda.

Losing Sturridge is obviously a major blow for Liverpool as Rickie Lambert, Mario Balotelli and Fabio Borini have yet to register a league goal between them in over 1,000 minutes of Premier League football.

Understandably, the Merseysiders have looked toothless in attack this season and just eight goals in their previous eight games has led to a poor run of form that sees them head into this weekend sitting down in eleventh place in the table.

Key for Rodgers is to figure out how to cope without Sturridge until the turn of the year and he’s hinted that the likes of Lambert and Borini could now get more opportunities to impress over the coming weeks. He continued:

“It’s hugely disappointing to lose a player of that quality. Now we just have to concentrate and focus on the players we do have. It will present an opportunity to the guys who have maybe been on the sidelines for quite a while.”

“We have an exciting period of games coming up. We want to ensure we go back to our basics and be really hard to beat and be strong and aggressive. We want to make an impact in front of goal, now there’s an opportunity for some players who didn’t think they’d get a chance.”

Liverpool face a crucial trip to Ludogorets in the Champions League on Wednesday following Sunday’s clash with Palace, while they also meet both Arsenal and Manchester United before the festive period begins, so it’s going to be a season-defining few weeks for the club and they’ll have to navigate it without their star striker.