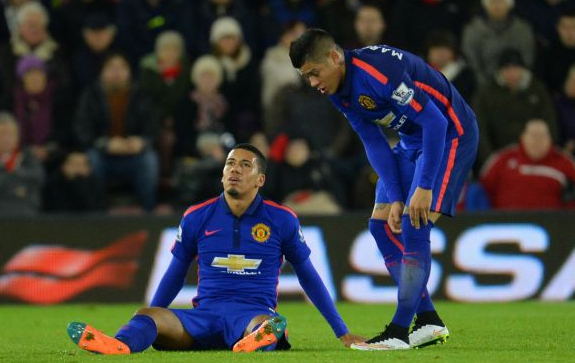 Manchester United have been hit by a fresh injury blow ahead of this weekend’s clash with Liverpool after Chris Smalling was ruled out for two weeks with a groin injury, according to reports today.

Smalling was forced off inside the opening 20 minutes of United’s 2-1 victory over Southampton at St Mary’s Stadium on Monday night after appearing to injure his groin while turning.

There were fears the 25-year-old could be facing a lengthy spell on the sidelines so the positive news for United is that the Mirror claim scan results have shown no sign of serious damage.

However, Smalling has suffered a minor groin tear and the newspaper suggests the injury will keep him out for at least two weeks which will see him miss this Sunday’s visit of Liverpool to Old Trafford, as well as next weekend’s trip to Aston Villa.

If his recovery goes well, then the centre-back could return to face Newcastle United on Boxing Day, but his absence this weekend for a crucial clash with old foes Liverpool will come as a major blow to Louis van Gaal.

The Dutchman has had to endure a succession of injuries in defence this season with Phil Jones, Jonny Evans, Rafael, Luke Shaw and Marcos Rojo all spending time on the sidelines at one stage or another.

Rojo is the only defender currently back in action – although Evans is understood to be very close to being in contention for a return this weekend, so van Gaal will be praying he can prove his fitness over the next 48 hours and be available on Sunday.

If the Northern Irishman fails to make it, then Michael Carrick may be forced to play at centre-back if van Gaal sticks with his preferred formation of playing with three at the back.

United head into Sunday’s game in fine form having won five games in succession and currently sit third in the Premier League table, so they can cement their spot in the Champions League qualification places by beating rivals Liverpool this weekend.