Arsenal playmaker Mesut Ozil has been speaking to the clubs official website today and has given a positive update on his rehabilitation from a knee injury. 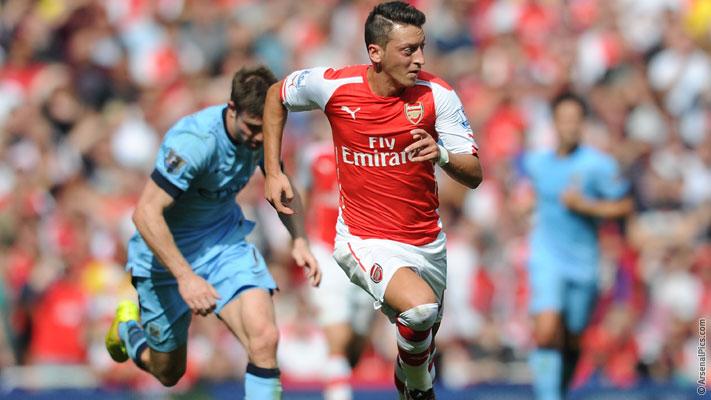 Arsenal playmaker Mesut Ozil has been speaking to the clubs website today and gave a positive update on his injury rehabilitation.

Our record signing has been on the sidelines for over ten weeks after undergoing surgery on a knee injury that he sustained against Chelsea way back in early October.

We saw images last week of Ozil returning to light training at London Colney and now the German international has revealed that he hopes to be in full training with the rest of the first team squad soon.

If all goes according to plan and he doesn’t suffer any set-backs, the 26-year-old says it ‘won’t be much longer’ before he’s back in contention for a place in Arsene Wenger’s team.

And that moment clearly can’t come soon enough for the attacker as he’s admitted that he’s been missing playing football these past two-and-a-half months.

“I’m working every day to get myself fit and I’m on the right path now. It won’t be too much longer before I’m back on the pitch. I hope to be back training with the whole team again as soon as possible.”

“After a time, you really miss playing football. You miss the ball and just want to play. When you watch the games and think that you could have been playing, and playing well, it makes you miss it. But that’s the way things are.

Ozil was unfairly criticised by some fans and media for his performances before his injury, but I think it’s clear we’ve sorely missed his creativity in the final third while he’s been out, so his comeback will be a major boost.

However, our main issue in recent weeks has been conceding sloppy goals and Ozil isn’t going to do much to help out in that department, but the player is convinced we can still do well during the second half of the season and finish the campaign ‘near’ the top of the table.

“When you watch the games, we’ve dominated a lot of them but have conceded unnecessary goals. That can’t happen, because in the Premier League, every team is capable of beating one another.

“We have to get our points by playing the game our way… I’m convinced that we will finish the season near the top of the table.”

Let’s hope Mesut’s recovery continues to be a smooth one and he doesn’t suffer any set-backs once he does return to full training, as I think he’s going to be a big player for us during the second half of the season and I can’t wait to see him play in the same side alongside the likes of Alexis Sanchez, Theo Walcott and Danny Welbeck.