Liverpool have received a timely injury boost with Adam Lallana telling the clubs website that he’s now 100% fit after recovering from a groin injury. 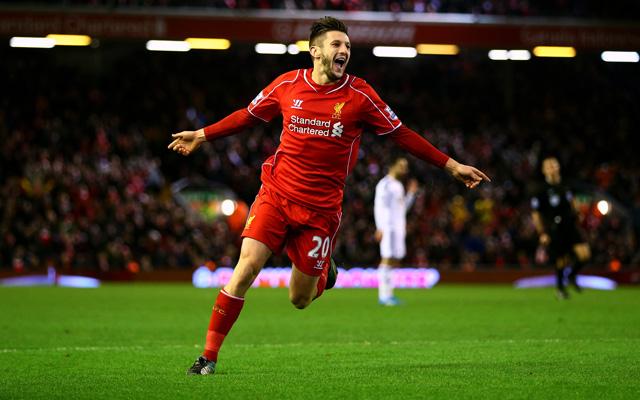 Liverpool have received a timely injury boost with Adam Lallana telling the clubs website that he’s now 100% fit after recovering from a groin injury.

Lallana has endured a frustrating debut season at Anfield following his big-money move from Southampton last summer with a spate of injuries hampering his progress.

The attacker has missed the last four fixtures, including last weekend’s disappointing FA Cup semi-final defeat to Aston Villa, after picking up a groin injury during the 2-1 defeat to Manchester United last month.

The 26-year-old was keen to get fit for the visit to Arsenal after the international break on April 4 but ended up aggravating the long-standing issue and has been forced to sit on the sidelines ever since.

However, Lallana is now back in full training again and has declared himself 100% fit and available for selection for Saturday’s trip to the Hawthorns to take on West Bromwich Albion.

“I had a groin issue. I’ve had a couple of them this season, but I’m back on top of it now, which is good.

“I’m back fit now, 100 per cent and have trained the last two days.

“It was frustrating as I had a bit of a recurrence of it before the Arsenal game, maybe due to being a little bit too eager to get back.

“But I’ve trained well, I feel good and I’m ready for the run-in. I’m looking forward to pushing on now, pushing on [next season] and improving on this season.”

The news will come as a welcome boost to Brendan Rodgers as he’s set to be without Daniel Sturridge and Lucas Leiva for Saturday’s game and it’s a match the Reds simply have to win if they want to retains hopes of a top four finish.

Liverpool head into the weekend action sitting seven-points behind fourth-placed Manchester City with a game in hand, so with only six games remaining, the Merseysiders can’t afford any more slip ups if they want to be playing in the Champions League again next season.