Man Utd have been hit by a major blow with Michael Carrick ruled out for the season but as many as four players could be back in contention to face Palace. 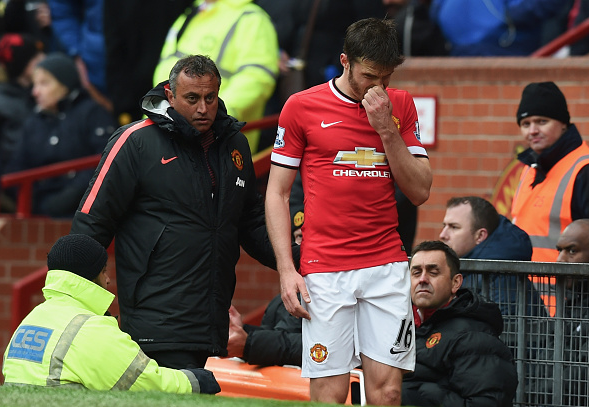 Manchester United have been hit by a major blow with Michael Carrick ruled out for the season but as many as four players could be back in contention to face Crystal Palace on Saturday.

Louis van Gaal has been speaking to the media at his pre-match press conference this afternoon and gave a team news and injury update to ManUtd.com.

Unfortunately the United boss confirmed that influential midfielder Carrick won’t feature again this season as his injury is worse than first feared.

The 34-year-old suffered the problem during the closing stages of United’s 4-2 win over Manchester City last month and has been forced to miss the last three games.

There was hope that the midfielder would return to fitness soon, but van Gaal has revealed that the injury is worse than first thought and ruled Carrick out for the rest of the campaign.

However, there was some positive news as the Dutchman also revealed that Luke Shaw is fit and available to face Palace after recovering from a minor knock which ruled him out of last weeks defeat against West Brom.

Jonny Evans is also back in contention after recovering from his latest injury, although a replace on the bench may be the best he can hope for as van Gaal says he’s still lacking ‘match rhythm’.

Fellow defender Marcos Rojo is also close to full fitness and he too could be back in the squad along with James Wilson after the young striker recovered from illness that’s sweeping through the Utd comp.

“Carrick is not available, it was more heavy than we thought,”

“We tried everything but now we have to think about next season. He shall not play anymore this season, it’s better now to focus for him on next season and being fit to start.

“When you see the stats, it’s clear that he’s very important but that’s also because we have only one right-sided holding midfielder. That’s what I am saying already in the whole of the season, that our selection is not balanced, and I want to restore that in the next transfer period. The life is not ending at 34, but for a professional football player, it’s close by. That’s why I have to handle again in that position.”

“There is a virus in our dressing room so it’s difficult to say,”

“He [Wilson] is already a little bit ill for one week but now he is recovering so I think he could be on the bench.”

United head into the weekend action looking over their shoulder as defeat to West Brom last week leaves them just four points clear of fifth-placed Liverpool, so they’ll be desperate to get back on track and move a step closer to securing Champions League qualification.