Arsenal get their Premier League season underway when they entertain West Ham at the Emirates on Sunday. Here’s the side Gooner Mac thinks Wenger will select

Arsenal get their Premier League season underway when they entertain West Ham at the Emirates on Sunday afternoon. Here is the side Gooner Mac thinks Arsene Wenger will select for the game:

Goalkeeper: Our sole summer signing, Petr Cech, is set to make his competitive debut and I’m sure he’s going to get an excellent reception from the Emirates faithful. David Ospina should be fit enough to replace Emi Martinez on the bench.

Defence: Wenger went with Hector Bellerin over Mathieu Debuchy at right back in the Community Shield last week and I think we’ll see the young Spaniard retain his place on Sunday as he didn’t put a foot wrong at Wembley.

Laurent Koscielny and Per Mertesacker are expected to continue as the first choice central defensive partnership while Nacho Monreal has continued where he left off from last season after keeping Kieran Gibbs out at left-back.

Midfield: The boss surprisingly broke up the successful partnership of Santi Cazorla and Francis Coquelin on Sunday with Aaron Ramsey coming in to the centre of the park. This saw Santi moved out wide for much of the game, although the players did interchange throughout the match.

Jack Wilshere has sadly been ruled out once again with the midfielder facing at least 6 weeks on the sidelines with another ankle injury.

Attack: Alexis Sanchez is back in training but is highly unlikely to feature on Sunday so that may see Cazorla continue on the left with Mesut Ozil in the No.10 role behind the striker.

Alex Oxlade-Chamberlain should retain his place after scoring a superb winner over Chelsea last week and this could see Theo Walcott start through the middle as he did at Wembley.

Theo didn’t have too much joy against the Premier League champions but he should get more room to play with against the Hammers and he’s looked a lot more sharp than Olivier Giroud in pre-season, so I think he’ll get the nod again up front.

Here is how I think we’ll see Arsenal line-up against West Ham: 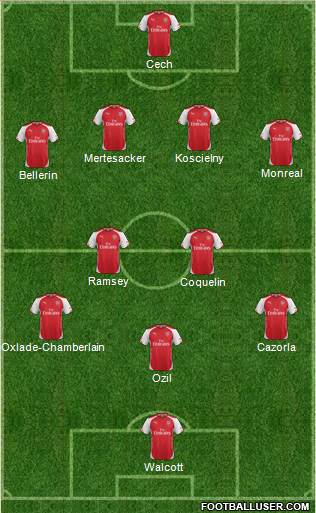