Arsenal will look to start their European campaign with a win when they play Dinamo Zagreb tomorrow night. Here is the side we think Wenger will select.

Arsenal will look to start their Champions League campaign with a win when they play Dinamo Zagreb in Croatia tomorrow night. Here is the side Gooner Mac thinks Arsene Wenger will select for the game:

Goalkeeper: Petr Cech is once again expected to start in goal. David Ospina should get his opportunities in the cup competitions, but the domestic cups rather than European Cup.

Defence: Per Mertesacker won’t be available after failing to recover from a virus so Laurent Koscielny should continue alongside Gabriel in the middle of defence.

I do think the boss might mix things up in the full-back spots though, with Mathieu Debuchy coming in for the rested Hector Bellerin while Nacho Monreal may get a breather with Kieran Gibbs in at left-back.

Midfield: Santi Cazorla is almost certain to continue alongside Francis Coquelin in the middle of the park. Jack Wilshere is set to undergo surgery on his fractured fibula which will rule him out for three months while Aaron Ramsey has been playing on the right of late.

Attack: The boss confirmed that Ramsey has been left back in London to rest ahead of Saturday’s trip to Chelsea so Alex Oxlade-Chamberlain could be given a run-out on the wing. Mesut Ozil and Alexis Sanchez are expected to start while Theo Walcott could keep his place up front after scoring against Stoke on Saturday.

Olivier Giroud came off the bench to get his name on the score-sheet too, so he is pushing for a recall to the starting eleven, but I think we might see Theo retain his place. 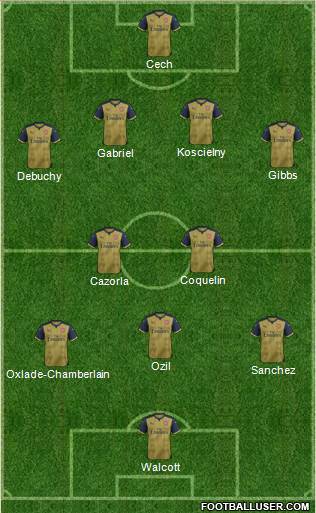