Man Utd take on Ipswich in the 3rd round of the League Cup at Old Trafford on Wednesday night. Here’s the side I think Louis van Gaal will pick:

Manchester United take on Ipswich in the 3rd round of the Capital One Cup at Old Trafford on Wednesday night. Here is the side I think Louis van Gaal will pick:

Goalkeeper: David de Gea is set to be handed a breather with Sergio Romero likely to be handed the gloves in goal.

Defence: van Gaal is expected to make wholesale changes from the side that beat Southampton on Sunday with Marcos Rojo potentially the only player keeping his place as he needs to build on his match fitness.

Youngster Guilermo Varela could get a run-out at left-back in place of the injured Luke Shaw while Paddy McNair and Antonio Valencia could also get starts at the back with Chris Smalling, Matteo Darmian and Daley Blind all rested.

Midfield: Morgan Schneiderlin and Michael Carrick should be given a breather with Bastian Schweinsteiger and Marouane Fellaini possibly coming in to the midfield. Ander Herrera is also in line for a recall to the starting eleven after being left out at St Mary’s on Sunday.

Attack: Ashley Young and Jessy Lingard could start on the wings with youngster James Wilson given a rare start up front. This would allow van Gaal to rest key men such as Wayne Rooney, Memphis Depay and Anthony Martial. 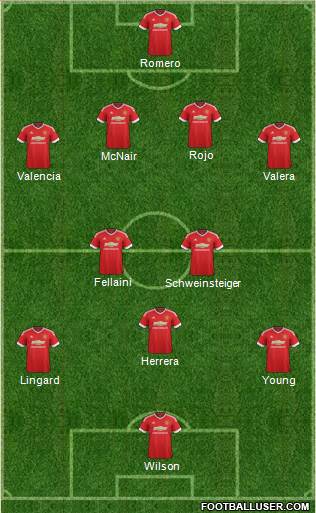